The demolition and construction of five Ashland-area bridges along Interstate 5 is moving along at a rapid pace with work scheduled to continue through next year.

The combination of age, weather and heavy use took a toll on the bridges. After nearly 50 years of use, the bridges are being replaced to meet modern traffic and freight needs.

‘Even though the project spans two years, Hamilton has a tight construction window based on the seasons,’ said ODOT Project Information Specialist Gary Leaming. ‘Removing the old southbound bridge over Bear Creek had to take into account the summer work period in the streambed. The goal on the Neil Creek Road overpass is to get as much work done before the winter shutdown in November.’ The project includes a moratorium on work at the Neil Creek Road Bridge because it is in the snow zone. The overall project is expected to be finished by November 2009.

The OTIA III State Bridge Delivery Program is part of the Oregon Department of Transportation’s 10-year, $3 billion Oregon Transportation Investment Act. OTIA funds will repair or replace hundreds of bridges, pave and maintain city and county roads, improve and expand interchanges, add new capacity to Oregon’s highway system, and remove freight bottlenecks statewide. About 17 family-wage jobs are sustained for every $1 million spent on transportation construction in Oregon. Each year during the OTIA program, construction projects will sustain about 5,000 family-wage jobs. 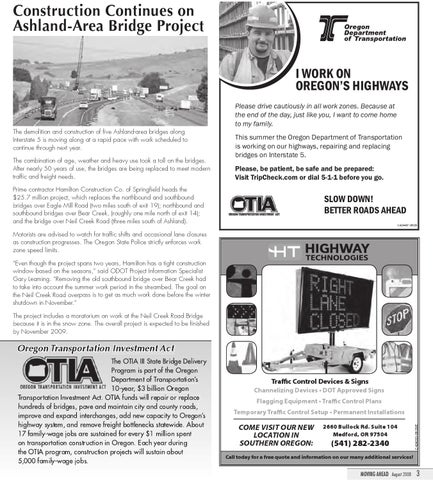