The 80-acre conservation bank, located near Medford, will help ODOT avoid costly project delays that can arise from conflicts with threatened species, according to Project Manager Brad Livingston.

‘This project serves as a model of collaboration between agencies,’ said Livingston, ‘and as a model to streamline regulatory processes for highway projects.’

A conservation bank is permanently protected land managed for endangered, threatened, and other at-risk species. In exchange for this protection and management, the U.S. Fish and Wildlife Service will approve credits based on the natural resource values on the bank land. ODOT can then use these credits to compensate for the environmental impacts of the highway projects.

‘This is a real milestone for Oregon,’ said Paul Henson, supervisor of the U.S. Fish and Wildlife Service’s Oregon office. ‘Thanks to ODOT’s hard work and commitment to stewardship, we’ve been able to bring an important conservation tool to the state.’

The species in question include two endangered plants and the threatened vernal pool fairy shrimp, an inch-long translucent crustacean related to lobsters and saltwater shrimp. Each of the species occurs in vernal pool habitat- small, shallow wetlands that fill with water during fall and winter rains and dry up in spring and summer.

The ODOT bank provides critical habitat for each of the at-risk species. Along with a neighboring Nature Conservancy preserve, the bank is part of a single block of nearly 225 acres of protected vernal pool habitat.

In addition to addressing species issues, the ODOT bank is available to compensate for impacts to wetlands. The U.S. Fish and Wildlife Service, the U.S. Army Corps of Engineers, and the Oregon Department of State Lands collaborated to allow for approval of the bank’s dual purposes under a single set of standards and procedures. This reduced the time ODOT spent on developing the bank and contributed to the agency’s decision to become Oregon’s pioneering conservation banker.

‘Teamwork and technical support from the Geo-Enviromental Section in Salem was key to the success,’ said Jim Collins, Region Geo-Enviromental Manager. ‘Bill Ryan and Bill Warncke really stepped up to help us develop this first-of-its-kind project.’

‘This project was too big for one person to lead, Livingston said. ‘Bill (Ryan) and Bill (Warncke) deserve much of the credit. ODOT is on the cutting-edge of project delivery by streamlining environmental processes while still protecting Oregon’s natural resources.’

According to Art Anderson, Area Manager for the Rogue Valley, local transportation stakeholders acknowledge that the project is an important conservation tool to the state and provides protection of habitat for some of the state’s most threatened species while still accommodating crucial transportation infrastructure investments.

‘Brad reviewed our 20-year planning horizon and developed this project to meet our needs,’ said Anderson. ‘It is going to save us a lot of time, and taxpayer money, especially on our largest, more complex highway projects.’

The federally-required Environmental Assessment (EA), a document that shapes future plans for the Fern Valley interchange in Phoenix, is scheduled for release in September or October.

The Draft EA will evaluate the two alternatives – a mix of previous concepts and those submitted by the Phoenix Association of Business and Property Owners. A 30-day public comment period begins once the draft EA is published. The comment period will include an open house in Phoenix so the public can provide feedback on the alternatives.

On a separate track, the Interchange Area Management Plan (IAMP) will now move forward to the Phoenix Planning Commission and City Council after nearly a year of stakeholder meetings. The IAMP is a planning document that examines future development near the interchange while also protecting the public’s investment in the roadway system.

‘The IAMP is a relatively new requirement for Oregon on all interchange projects, said ODOT Project Leader Dick Leever.

According to ODOT Planner John McDonald, future needs are becoming acute.’Significant growth over the past few years as well as projects on tap show the Fern Valley interchange needs to be fixed,’ McDonald said. ‘Without the interchange and the management plan, Phoenix would become hamstrung for future growth, especially on the east side of the interchange.’

Construction is currently scheduled to begin in 2011. For more information, visit the project web site: www.oregon.gov/odot/hwy/region3. 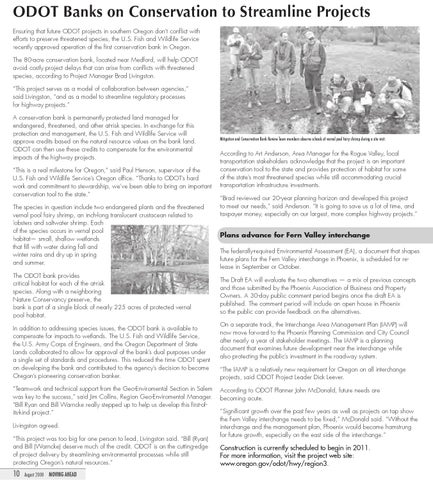