Located on the Green Springs Highway (Oregon 66), this stopping point has served travelers since Jesse Applegate led his wagon train through southern Oregon in 1846. The name ‘Tub Springs’ originated in the 1930s from the tubs installed to provide spring water for travelers, and this service continues today.

According to Oregon State Parks Ranger Jim Bennett, the newly-furbished Tub Springs Wayside is now better than ever thanks to an Eagle Scout project headed by 17-year-old Tyler Leaming, of the Medford Boy Scout Troop 7, and an interagency partnership between Oregon State Parks and ODOT.

Leaming, who will be a senior at North Medford High School this fall, conceived the Eagle Scout project two years ago after learning that the Wayside’s interpretive sign had fallen victim to rot and vandalism. He proposed to build a replacement of the heritage sign, which details how Oregon 66 was established after wagon trails.

Leaming’s plan was so well received by the Boy Scout council and Oregon State Parks that more needs were addressed. Plans were drawn up to build a third leg to an existing trail, completing a quarter-mile loop. Directional signs along the trail and the repainting of a second interpretive sign were added to the project.

‘The project scope quickly grew,’ said Leaming. ‘It seemed like a natural to clean up the park, too.

A call was made to the nearby ODOT maintenance office to see if the agency could dispose of the limbs and woody debris that would be cleaned up from the Wayside. In the end, six truckloads of downed limbs and trees, many resulting from the harsh storms of the previous winter, were transferred to an ODOT maintenance yard for disposal.

‘At first, I was a little overwhelmed,’ said Leaming. ‘Financing was the biggest hurdle. I thought I wasn’t mature enough to handle a project of this size, but I was able to wrestle it and the Wayside looks great in the end.’Armed with a $300 budget from Oregon State Parks, donations from local merchants, and a team of volunteers, Leaming completed the project over two weekends last May. He estimates more than 460 hours of labor was donated to the Eagle Scout project.

‘This has been a big improvement for us,’ said Bennett, who oversees the Wayside from nearby TouVelle State Park. ‘We’ve heard nothing but positive comments. People are happy about having the interpretive sign back. They are also enjoying a safe, pleasant 10-minute hike where you can stretch your legs and get a hands-on look at Oregon history.’ 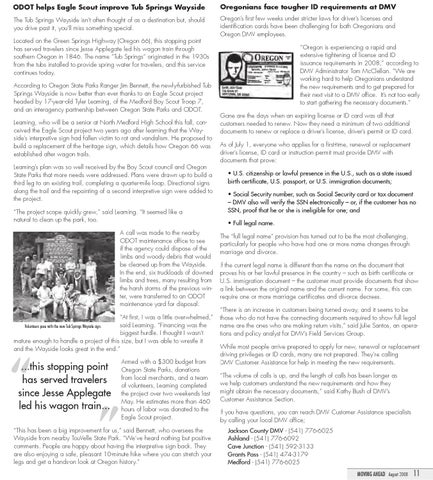