With 11 new bridges scheduled for construction within the South Medford Interchange project, the score is currently seven down and four to go.

In July, the seventh bridge – a new southbound Interstate 5 structure over Bear Creek – opened to traffic.

‘That was a key piece,’ said ODOT Project Manager Joe Thomas. ‘Once I-5 traffic is flowing on both new Bear Creek bridges, the temporary bridge can be removed.’

Prime contractor Wildish Standard Paving of Eugene is making adjustments to bring northbound traffic onto the permanent bridge. This will signal a major change in traffic flow for the south Medford area.

‘Removing the detour structure opens the door to the project’s next level, including finishing the new northbound off-ramp and opening it to traffic,’ said Thomas.

In spring 2009, the most challenging piece of the South Medford Interchange project begins. With the interchange in full operation connecting east and west Medford, Barnett Road between Alba Drive and Highland Drive will undergo construction for about six months as the new Bear Creek Bridge is built. During this stage, Barnett Road will be closed to through traffic. However, local businesses – Black Bear Diner, Dairy Queen and the motels, Motel 6, Days Inn, Best Western Horizon Inn and Travelodge – will remain open during construction.

The Barnett Road-Bear Creek Bridge has undergone many modifications over its 60-year lifespan to handle higher traffic volumes. Currently, more than 45,000 vehicles per day pass over the bridge.

The new bridge will touch down near the Black Bear Diner, which posed additional construction challenges for Wildish Standard Paving.

‘Our engineers examined ways to rebuild the Barnett Road-Bear Creek Bridge in the least amount of time and with the fewest impacts to local traffic,’ said Thomas. ‘And to do that meant closing the roadway to traffic so the bridge could be constructed quickly.’

According to Thomas, temporary bridges were not a viable solution. Traffic volumes and expected delays on Barnett Road posed problems as well as the additional time added to the overall project schedule.

‘We’re focused on getting in, getting it built right and getting out as soon as possible,’ said ODOT Public Service Representative Bill Boyett. ‘Wildish knows how important this link is to businesses and residents in south Medford.’ 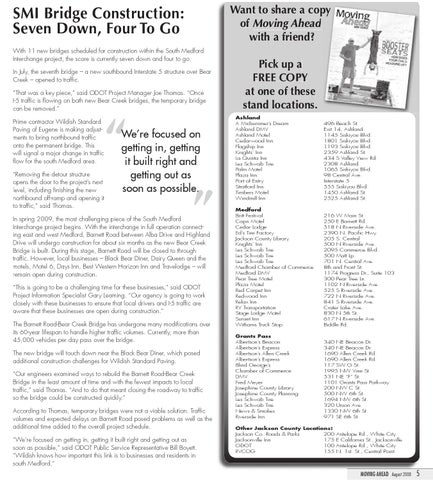