Prime contractor Wildish Standard Paving of Eugene and its subcontractors are winding up a busy summer construction season. The results of their recent work will be apparent to motorists this fall as the South Medford Interchange project reaches another major milestone – shifting traffic onto the new northbound off-ramp and southbound on-ramp.

‘There’s a big change coming and the driving experience will be different,’ said ODOT Project Manager Joe Thomas. ‘Of course, drivers will need some time to adapt to the new configuration but they won’t have any trouble getting around the south Medford area.’

Before the traffic shift occurs, the Oregon Department of Transportation will ensure advance signing is in place to alert motorists to the new route. According to ODOT Project Information Specialist Gary Leaming, the agency will launch an information campaign in the weeks before the traffic change. The campaign will include distributing maps to hotels, fuel stations, restaurants, medical offices and other local businesses.

The South Medford Interchange project is designed to improve safety and congestion. The centerpiece of the project is construction of a new interchange 1,900 feet south of the existing Barnett Road exit (exit 27). The new interchange design is called a single point urban interchange (SPUI), which can handle large volume of traffic. The SPUI is located close to Bear Creek, so additional bridges are needed to accommodate the retaining walls for the on- and off-ramps.

The project is designed to improve safety and congestion in south Medford. The city of Medford is contributing $15 million toward the project.A project solution team and citizens advisory committee worked through more than 20 different concepts to develop the design. The Highland Alternative was identified as the preferred alternative. 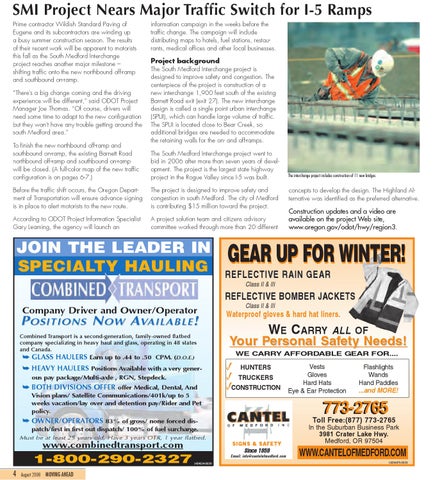