The Neil Creek Bridge replacement project on Interstate 5 went into hiatus earlier this month. The bridge, located three miles south of Ashland, is one of fi ve I-5 bridges beingreplaced in the Ashland area.

The Neil Creek Bridge is in the Siskiyou summit snow zone. Prime contractor Hamilton Construction Co. of Springfi eld, Ore. will resume work on the bridge in the spring.

“Construction through the winter would not only be diffi cult given the unpredictable snow levels but the safety of workers and motoristswould be at risk, too,” said ODOT Project Information Specialist Gary Leaming.

However, work will continue on the fourother bridges – spanning Eagle Mill Roadand Bear Creek – included in the $25.7 million project.

“The contractor has made great strides this spring and summer,” said Leaming.“The overall project hasn’t quite reached the halfway point yet. Construction is scheduled to continue through November 2009.”

Age, weather and heavy use have taken their toll on the five I-5 bridges.After nearly 50 years, the bridges mustbe replaced to meet modern traffic andfreight requirements.

Motorists are advised to watch for traffic shifts and occasional lane closures as construction progresses on the bridges.

“There are a number of improvements thatwill be made,” said ODOT Area ManagerArt Anderson. “Our agency is sensitiveto Ashland’s needs. We’ll have an extensive outreach program with nearby businesses, residents and the communityat large.”

According to Anderson, the City of Ashland will take the lead between nowand April 2009 in selecting the aesthetic designs while still staying within project’s schedule and budget. 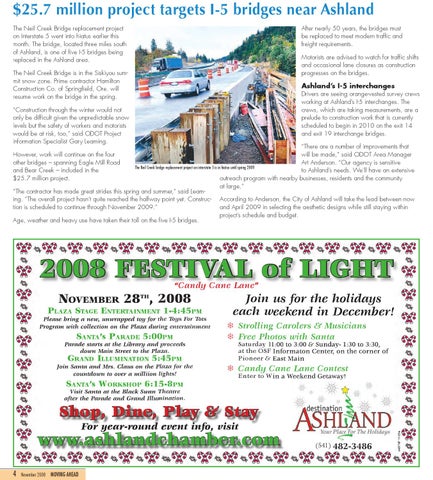