The northbound Interstate 5 off-ramp for the new South Medford Interchange project opened to traffic earlierthis week. The opening is the first of two stages where new ramps will open and old ramps at the Barnett Roadinterchange will close.

“We had hoped to have these two ramps open in October,” said Gary Leaming, ODOT Project Information Specialist.“We’ve been looking forward to this milestone all year.”

According to ODOT Project Manager Joe Thomas, these two stages mark the first major shift for local traffic flow in the interchange area. (A full-colormap of the new traffic configurationis on pages 6-7).

“The new northbound on-ramp opening will be another critical piece to the project because it clears the way for construction without delaying traffic,” said Thomas.

Barring any further delays, the $70 million project should have the new interchange in operation by the end of spring 2009.

According to Leaming, ODOT will launch an information campaign in the weeks before the full interchange opens. The campaign will include distributing maps to hotels, fuel stations, restaurants, medical offices and other local businesses.

Once traffic shifts to the new interchange, Wildish Standard Paving will begin replacing the Bear CreekBridge on Barnett Road.

“We examined ways to rebuild the bridge in the least amount of time and with thefewest impacts to local traffic,” said Thomas.

According to Thomas, temporary bridges were not a viable solution for this construction phase due to the traffic volumes and expected delays on Barnett Road as well as the additional time that would be added to the overall project schedule. The new bridge will touch down near the Black Bear Diner.

SMI Project backgroundThe South Medford Interchange project is designed to improve safety and reduce congestion. The centerpiece of the project is construction of a new interchange 1,900 feet south of the existing Barnett Road exit (exit 27). The new interchange design is calleda single point urban interchange (SPUI), which can handle large volumes of traffic. The SPUI is located close to Bear Creek, so additional bridges are needed to accommodate the retaining walls for the on- and off-ramps.

The project went to bid in 2006 after more than seven years of development. The City of Medford is contributing$15 million toward the project.

A project Solution Team and Citizens Advisory Committee worked through more than 20 different concepts to developthe design. The Highland Alternative was identified as the preferred alternative.

Construction updates and a videoare available on the project Website, www.oregon.gov/odot/hwy/region3. 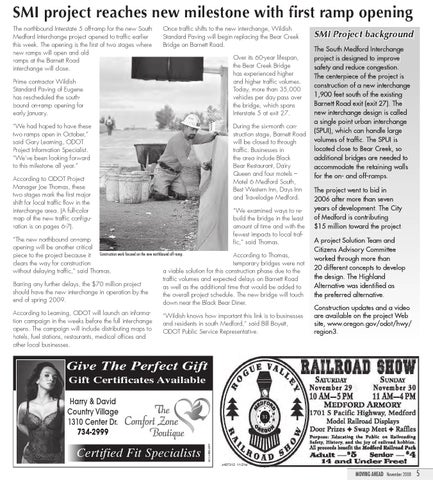