U.S. Senator Ron Wyden recently stopped in Medford as part of his statewidetour to push for a new federal stimulus package. Standing with local leaders from the City of Medford and Jackson County on the morning of Nov. 7, Wyden pressed his case for infrastructure funding.

“I think dollar for dollar these transportation projects give you a lot more of an economic boost and make your economy healthier for today and tomorrow,” Wyden said.

“We simply don’t have enough revenueto support the road system that we have in light of the reduced timber revenues,” Smith said. “[Infrastructurefunding] provides direct jobs in thecommunity.”

In addition to cities’ and counties’needs, ODOT developed a $564 millionlist of more than 100 projects, including modernization, bridge repairs,paving, safety, and other projects thatwould be good candidates for fundingunder an economic stimulus package.These projects are ready to go andcould be under construction in summer2009, producing jobs in highway construction and related industries quickly.

“There’s tremendous need for highwayinvestments in Oregon, and there are many opportunities to invest federalmoney in projects that would produce thousands of living-wage jobs quickly,”said Travis Brouwer, ODOT Federal Affairs adviser.

ODOT Region Manager Paul Mather spoke with Wyden and local transportationstakeholders at the event. According to Mather, these investments would pay off long-term returns by building a safer and more effi cient transportationsystem that would reduce the costs associated with inadequate roads in terms of congestion, car crashes, and wear and tear on vehicles.

Based on 2008 dollars, about 14 family-wage jobs are sustained for every$1 million spent on transportation construction in Oregon.

“We are grateful that Senator Wyden continues to push for infrastructure funding in the economic stimulus and hope Congress will take up this challenge,” Mather said.

“We’d hoped to have the DEIS putto bed by now but the technical teamfound the regional traffic modelsneeded updating,” said Leever.

The project proposes to build abypass for through traffic from thenorth Medford interchange to WhiteCity. The corridor alternatives wouldallow through traffic to travel on anaccess-controlled highway and leaveHighway 62 as it currently is withfull access to streets and driveways.There are several variations of theroute to avoid development or naturalresources. Here are the two optionsfor the south end of the bypass:

• The Split-Diamond Alternativewould modify the existing rampsnorth of Interstate 5 exit 30 to accommodate bypass traffic. Motorists would travel on a separate road from I-5 to White City. The existing alignment on Oregon Highway 62 would remain as is with full access to businesses.

• The Existing Highway Alternative would merge the bypass with Highway62 from I-5 to near the Butler Truck Center and Lava Lanes. Due to high traffic volumes, there would be no access from there west to I-5. The Poplar/Bullockintersection would change into either an underpass or overpass.

More information is online at: www.oregon.gov/odot/hwy/region3. 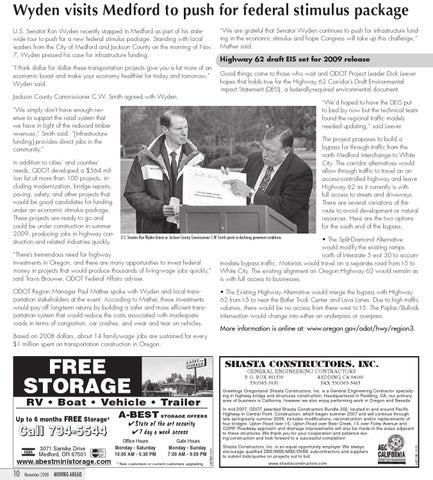