With each opening of a new Interstate 5 on- and off-ramps serving as project milestones, the biggest challenge still lies ahead for the $70 million South Medford Interchange project.
Beginning June 1, construction will shift focus from work on I-5 to replacing the Barnett Road-Bear Creek Bridge. The bridge, which is owned by the City of Medford, recently needed emergency repairs to prevent it from being load limited, effectively closing the bridge to all traffic except passenger cars.
Over the past 60 years, the Barnett Road-Bear Creek Bridge has grown from a two-lane bridge on a country road to carrying more than 45,000 vehicles per day.
A new bridge ensures Barnett Road will continue to serve south Medford traffic without any weight restrictions.
Barnett Road will be closed to through traffic between Stewart Ave. and Highland Drive. The businesses in the area – Black Bear Restaurant, Best Western Inn, Dairy Queen, Motel 6, Days Inn and Travel Lodge will remain open during the bridge replacement work (see the project map on pages 6-7).
According to ODOT Project Manager Joe Thomas, prime contractor Wildish Standard Paving of Eugene is under a fast-track schedule for this project stage.
“We examined a lot of different construction approaches to find a way to tear down the old bridge and build a new one in the least amount of time and with the fewest traffic impacts,” said Thomas. “Naturally, the local business owners are concerned about how long the closure would last, how customers would reach them, and how we would ensure signing was in place, so customers would know these these businesses are open.”
Working with local businesses
According to ODOT Project Information Specialist Gary Leaming, the agency has met with these adjacent businesses to address their concerns during construction.
“We know customers need to reach these businesses during the six-month closure,“ said Leaming. “We’ll launch an information campaign that will include directional signs, maps and mailings to coincide with the work.”
Speeding up construction
Wildish Standard Paving started making preparations for the bridge replacement last year. A work bridge skeleton was built in Bear Creek, just north of the existing bridge. That work will speed up the mobilization efforts to demolish and replace the existing bridge.
“There’s a limited window for the contractor to work inside a waterway, below the ordinary high water mark,” said Leaming.
The in-water work window runs from June 15 to Sept. 15. That time period is the creek’s low flow months and is regulated due to fish spawning concerns.
Project background
The South Medford Interchange project is designed to improve safety and reduce congestion. The centerpiece of the project is construction of a new interchange 1,900 feet south of the existing Barnett Road exit (exit 27). The new interchange design is called a single point urban interchange (SPUI), which can handle a large volume of traffic. The SPUI is located close to Bear Creek, so additional bridges are needed to accommodate the retaining walls for the on- and off-ramps.
The South Medford Interchange project went to bid in 2006 after more than seven years of development. The project is the largest state highway project in the Rogue Valley since I-5 was built.
The project was designed to improve safety and congestion in south Medford. The City of Medford is contributing $15 million toward the project.
A project Solution Team and Citizens Advisory Committee worked through more than 20 different concepts to develop the design. The Highland Alternative was identified as the preferred alternative.
Construction updates and a video are available on the project Web site, www.oregon.gov/odot/hwy/region3. 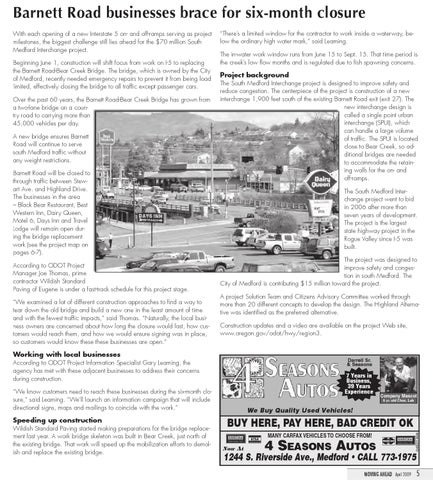