Prime contractor Copeland Construction of Grants Pass started work on the Highway 99/238 project in March. The project focuses on two sections: repaving Highway 99 from Fruitdale Creek to Fruitdale Road; and a grind and inlay of new asphalt on Highway 238 from the “South Y” intersection to near Jaynes Drive.
This $4.5 million Highway 99/238 project focuses construction on both ends of recent highway improvements that the City of Grants Pass completed last year.
“The original project plan was to just repave a section of Highway 99,” said ODOT Project Leader Jayne Randleman. “The City of Grants Pass asked our agency to consider adding other elements to improve aesthetics and safety.
“The City saw this area as a gateway into the community and had a vision of adding curbs, gutters, sidewalk, bike lanes and landscaping.”
ODOT worked with the City to tap additional funds to pay for sidewalks and bicycle improvements. Together, city staff and the agency delivered presentations to the Grants Pass City Council. The partnership included meetings with property owners in the project area and a workshop for the city council and business owners.
“This will be a nice addition to Grants Pass when the project is completed,” said Randleman. “When finished, the city will have a new road with a beautiful streetscape that will be friendly to motorists, businesses, bicycles and pedestrians.”
The changes haven’t come without concerns, primarily from business owners worried about access. ODOT Public Service Representative Bill Boyett has been on site since mid-March, talking to business owners.
“I’m there to communicate the day-to-day changes on the project,” Boyett said. “The agency and the city spent a lot of time during the design phase sharing information about the changes coming to business accesses.
Randleman said the lack of access control was one of the factors that led to a higher-than-usual crash rate.
“This project is adding defined driveways to this stretch of highway,” Boyett said. “Before there were no driveways, so you had people pulling in and out and backing into traffic.” 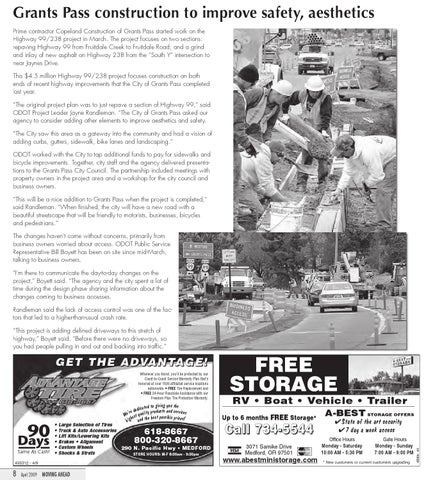