I-5 project on schedule, lanes to reopen in two weeks

Motorists are welcoming the good news in south Medford: the six-week Interstate 5 rebuild project is on schedule to reopen all lanes before the end of April.
The project began in mid-March, closing one lane of I-5 in each direction so construction crews could dig up the original concrete used when I-5 was built in the 1960s.
“The road bed was either compacted soil or a thin layer of asphalt,” said ODOT Project Information Specialist Gary Leaming. “The concrete roadbed dispersed the weight well but traffic volumes and weights have changed significantly since I-5 was first built.”
Over time, the concrete cracked beneath the increasing traffic volumes and weights, allowing water to seep into the roadbed. The project rebuilds I-5 with two feet of new roadbed topped with nine inches of asphalt.
“We knew this would be a major inconvenience for everyone,” said ODOT Project Manager Joe Thomas. “Our goal is to get the work done as quickly as possible so we can reopen I-5 for summer, when traffic volumes are at their highest.”
The work zone provides adequate space so construction can run in two shifts, 22 hours per day. Construction work will continue through the summer but will not require lane closures.

Stan and Ann
Roughly 48,000 vehicles travel between the two Medford I-5 interchanges each day. About half of that traffic consists of local motorists who use I-5 to travel quickly from north and south Medford.
ODOT launched a multi-media information campaign asking Medford-area motorists to use local roads during the six-week project. The TV and radio advertisements featured Stan and Ann, a married couple who gets stuck in traffic.
More project information, including the TV and radio advertisements featuring Stan and Ann are available online at www.oregon.gov. The TV ads can also be found on www.youtube.com. 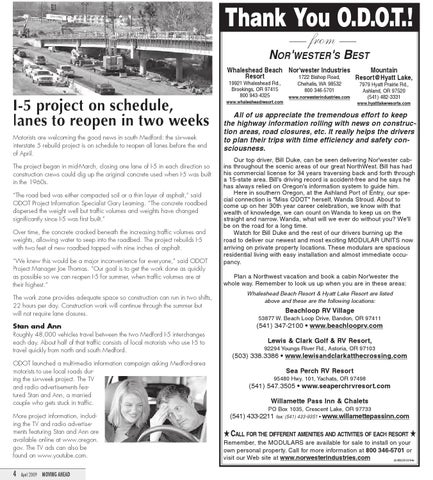