Putting Oregon Back to Work

“The state stimulus package Go Oregon!, the federal stimulus program, and the plan spelled out in my Jobs and Transportation Act will create thousands of jobs, improve transportation infrastructure and address years of deferred maintenance on aging buildings across Oregon,” the Governor said.

American Recovery and Reinvestment Act
The federal economic stimulus legislation, known as the American Recovery and Reinvestment Act (ARRA, HR 1), provides Oregon over $400 million to preserve and improve the state’s highways, transit systems, and bicycle/pedestrian infrastructure. Funding will be provided to the state, local governments, and transit districts under a variety of programs.

Oregon could receive more than that by competing for and winning grant dollars also included in the Act. Go online to www.oregon.gov/ODOT/ recovery/economic_stimulus.shtml for more information.

Go Oregon! state stimulus plan
Governor Kulongoski signed into law Senate Bill 338, the Go Oregon! state stimulus plan. The plan authorizes $175 million in bonding to fund projects that will make needed repairs to schools, colleges, transportation infrastructure and address deferred maintenance projects across the state. The projects will create jobs for Oregonians at a time when the unemployment rate continues to climb.

Projects for the Oregon Department of Transportation account for $4.4 million in Go Oregon funding. ODOT will let more than 100 projects – the majority of the projects are small, under $50,000 – for bid thoughout the state and will go through a streamlined small contracting process. Go online to www.oregon.gov/ODOT/recovery/stimulus_info.shtml for more information.

Based on 2008 dollars, about 14 family-wage jobs are sustained for every $1 million spent on transportation construction in Oregon. Each year during the remainder of the OTIA program, it is estimated that construction projects will sustain an average of 4,100 family-wage jobs. Go online to egov.oregon.gov/ODOT/HWY/OTIA/ for more information.

Summer edition comes out June 11
Our summer edition will detail all of the state highway construction work around the Rogue Valley. Drop us a line (the contact information is on this page) and let us know what you’d like to see in upcoming editions.

Remember, orange cones on Oregon roads mean one thing: work zone ahead. The single biggest factor in crashes is driver inattention, the other contributing factor is speed. We ask motorists to slow down, pay attention to work zone signs and watch for workers. National Work Zone Awareness Week is April 6-10. For more information about that effort go online to: www.workzonesafety.org. 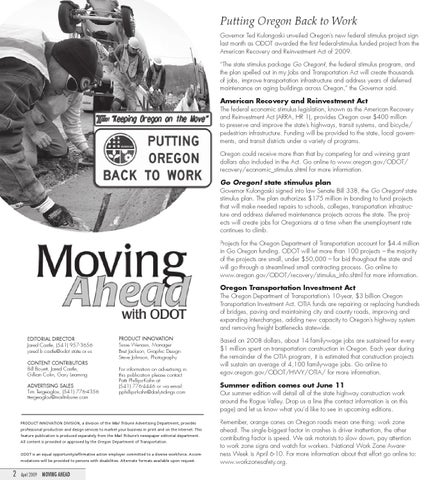