The Rock Point Bridge, which spans the Rogue River about 12 miles northwest of Medford, is scheduled to get a well-deserved facelift this September. The bridge opened north of Gold Hill in 1920 – when Oregon featured only 620 miles of paved roads statewide – after the last of the wooden structures that preceded it (dating back to the 1860s) was lost to flood.
The Rock Point Bridge was designed by Conde B. McCullough, who would go on to become Oregon’s premier bridge engineer, famous for the series of Oregon coastal bridges constructed in the 1930s. The bridge’s south approach was replaced in 1953.
In 2000, expedited repair work strengthened the bridge’s crossbeams in order to lift a weight restriction (10,000-pound gross load) placed on the bridge by the ODOT bridge engineering section.
The $4.6 million repair project will replace the bridge railing using stronger concrete and steel while replicating the original design. Additionally, the bridge deck and cracked or defective concrete will also be replaced. To accommodate the repair work the bridge will undergo a significant closure after Labor Day.
Detours will be in place during the Rock Point Bridge closure, directing motorists to use the Gold Hill interchange at Interstate 5 exit 40. Emergency service providers will also be notified so they can make accommodations during the bridge closure.
“We know the closure will be an inconvenience,” said ODOT Project Leader Dick Leever. “Our goal is to get the work done and the bridge reopened quickly while keeping our eye on the budget.”
On the Rock Point Bridge, McCullough illustrated how form could complement function and the nearby landscape. Using a reinforced concrete deck arch, he designed a 505-foot span bridge over one of the rockiest sections of the Rogue River, hence the name Rock Point.
According to Historic Highway Bridges of Oregon, construction was a challenge: “Because of the great depth of water at the bridge location, it was impossible to build falsework under the main arch span. The contractor (Parker and Banfield, Portland) solved the problem by building a temporary wood truss span over the bridge to give support to the forms.” 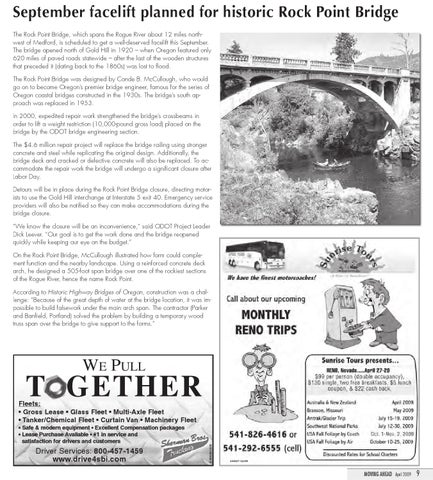