The Aesthetic Advisory Committee unveiled proposed designs for the Interstate 5 bridges at exits 14 and 19 at two Ashland open houses on May 28. The committee, appointed by the City of Ashland to make design recommendations for the project, has met since the beginning of the year.

Members of the advisory committee have enjoyed the process of choosing a design theme for the bridges.

“It has been a terrific experience,” said Jennifer Longshore, who represents the Ashland Public Arts Commission. “Coming to the table and collaborating with the project team allowed our committee to develop an aesthetic vision that will serve as Southern Oregon’s gateway for many years to come.”

The group considered a variety of bridge design themes before settling on a contemporary Art Deco theme for the bridges, scheduled for construction in the Summer of 2010. Special attention was focused on exit 14 (Green Springs Highway), which is a northbound gateway to Ashland and Oregon.
John Rinaldi, Jr., chairman of the Ashland Tree Commission, agreed. “Together we worked collaboratively to arrive at project design elements that we feel typify the unique character of our community and the surrounding landscape.”

The proposed new designs will feature artistic treatments that reflect architecture from Ashland’s renowned historic downtown.
At their April meeting the Aesthetic Advisory Committee recommended an Art Deco theme for the bridges, with additional detailing drawn from the historic 1925 Ashland Springs Hotel.

The group found inspiration in design details from the rooftop of the Ashland Springs Hotel. Ten-foot tall concrete pylons at the ends of the bridges are topped by pointed shapes also found on the hotel’s parapets. The shape also is featured on the supports for the light poles. The pedestrian fencing with a  rust-colored powder coating features a central arch that was taken right from the hotel’s rooftop faзade.

In another nod to downtown Ashland, the light poles on the bridge will provide supports for banners. The light fixtures will be “dark-sky-compliant” to minimize light pollution at night. The newly widened bridge at exit 14 also will feature a center turn lane, traffic signals at both ends of the bridge, and bike lanes and sidewalks.

The design of exit 19 will be a more simplified version of exit 14. The bridge will be replaced with a new, wider structure featuring a center turn lane. The bridge deck will feature wide shoulders to accommodate bicycles.

Landscaping plans at exits 14 and 19

The Aesthetic Advisory Committee weighed in on proposed landscaping treatments at both of the exits. The group wanted to ensure the bridge designs work in harmony with the surrounding landscape.

For exit 14, the committee decided to make a statement for northbound I-5 drivers approaching the interchange. The landscaping will feature mass plantings of flowering bulbs, trees and shrubs providing colorful, four-seasons interest. Flowering pear trees will create an orchard effect to highlight the area’s agricultural offerings. Space can be left within the landscaped area for future artwork or a sign welcoming visitors to the community.

Drivers approaching exit 14 southbound will see “natural” groves of taller evergreen trees and shrubs. Exit 14 will have a new irrigation system installed with the plantings.

Exit 19 will have a more natural effect, with mass plantings of native trees and shrubs such as white oak, Oregon grape, and ceanothus. No irrigation will be installed at exit 19, therefore native species will perform better at this location. Temporary watering will be provided in the first couple of years to help establish the plants. 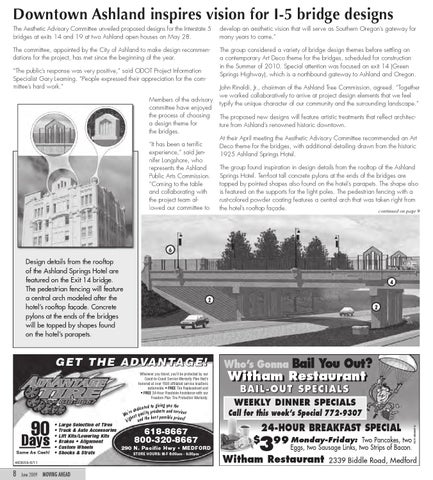