The Oregon’s Jobs and Transportation Act will finance 37 specific projects around the state. The largest one in the Rogue Valley is the multi-modal corridor project for Highway 62, which will receive $100 million.

The Highway 62 corridor experiences some of the heaviest traffic and congestion in southern Oregon. The volume of traffic in the corridor is similar to that found on Interstate 5 north of Medford and is expected to double in 20 years.

The project proposes to build a bypass for through traffic from the north Medford interchange to White City. The corridor alternatives would allow through traffic to travel on an access-controlled highway and leave much of Highway 62 as it currently is with full access to streets and driveways.

There are currently two bypass options in the Draft Environmental Impact Statement (DEIS) for the Highway 62 Corridor Project. Both parallel the Old Medco Haul Road between White City and Medford but have different connecting points to Highway 62 in the south.

“Either alternative would cost more than $400 million, so we need to look at phasing the project,” said ODOT Area Manager Art Anderson. “The Highway 62 Project will develop a multi-modal solution, one that addresses transit, bicycles, pedestrians and other forms of transportation.”

According to ODOT Project Leader Dick Leever, the Highway 62 Corridor Project DEIS, a federally-required environmental document, is likely another year away from completion.

The DEIS was originally scheduled for completion in 2008.

“Our technical team identified that the regional traffic models needed updating,” Leever said. “We hoped to have the DEIS out by now, but we can’t rush the modeling work. It is important to get it right, so we don’t have to go back and do it again.”

More information, including the two bypass options in the DEIS are available online at the Highway 62 Project Web site: www.oregon.gov/odot/hwy/region3. 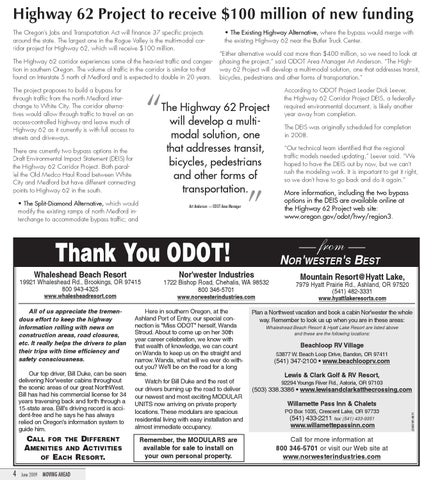