Prime contractor Holm II started its final construction season in Grants Pass, building twin Interstate 5 bridges at exit 55. The project is on schedule for completion in spring 2010.
Last month, northbound I-5 traffic shifted onto the new southbound bridge. Southbound traffic will remain on a temporary detour bridge until the end of the project. Demolition of the old northbound I-5 bridge created a large hole, where the new bridge’s foundation is taking shape.
“This isn’t your typical bridge replacement on the interstate,” said ODOT
Project Information Specialist Gary Leaming. ”These are not straight line bridges, so we can’t use pre-stressed concrete girders. The bridges have to be poured in place because this section of I-5 is on a curve and one will have an on-ramp attached.”
The $24 million Grants Pass bridge bundle is part of the Oregon Department of Transportation’s 10-year, $3 billion Oregon Transportation Investment Act. OTIA funds are repairing or replacing hundreds of bridges, paving and maintaining city and county roads, improving and expanding interchanges, adding new capacity to Oregon’s highway system and removing freight bottlenecks statewide.
In addition to building two new bridges at exit 55, prime contractor Holm II of Stayton, Ore., is building a new, northbound Louse Creek bridge at the
I-5 Merlin exit 61. Motorists using the Merlin exit should expect short delays until the project is finished.
In a separate bridge bundle, Wildish Standard Paving of Eugene, Ore.
completed construction of two, new I-5 bridges that span Beacon Drive in Grants Pass earlier this spring.
Oregon Transportation Investment Act
Of the 365 bridges in the OTIA III State Bridge Delivery Program, 68 are
currently under construction, and another 159 have been completed and open to traffic.
Based on 2008 dollars, about 14 family-wage jobs are sustained for every $1 million spent on transportation construction in Oregon. Each year during the remainder of the OTIA program, it is estimated that construction projects will sustain an average of 4,100 family-wage jobs. 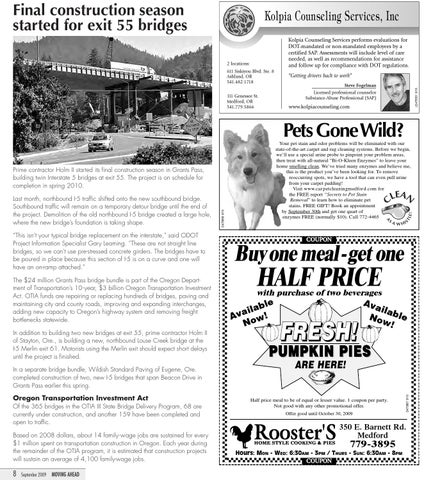