With the South Medford Interchange project near completion, the Fern Valley Interchange in Phoenix becomes the next major transportation project scheduled for construction in the Rogue Valley.

Scheduled for construction in 2012, the project will build a new interchange and improve connectivity to the roads on both sides of Interstate 5 at Exit 24.

Plans are currently underway for a winter release of the federally-required Environmental Assessment (EA) for the project. The EA will include the impacts to the natural and human environment of one design alternative, referred to as the North Phoenix Through alternative. The second alternative was eliminated earlier this year because it would have an adverse impact on farm land.

“We went through an extensive process to include two design alternatives but in the end the Department of Justice counseled us to drop it because it would require an additional land use goal exception,” said ODOT Project Leader Dick Leever.

The North Phoenix Through alternative will be the subject of a 30-day public comment period and open house. The $70 million Fern Valley Interchange project is now fully funded after $25 million was designated for the project as part of the 2009 Oregon Jobs and Transportation Act.

New interchange type
The Fern Valley interchange will be constructed using a ‘crossing’ or ‘diamond’ design that provides a higher capacity to move traffic while requiring lower right of way needs. The design, which moves vehicles to the opposite side of the road and reduces the number of traffic signal cycles, is currently in use in Missouri.

The North Phoenix Through alternative will allow traffic coming from either Phoenix or I-5 to travel north to the east side of the Home Depot before connecting with the existing North Phoenix Road near Arrowhead Ranch. Eastbound traffic will travel on a new South Phoenix Road that begins northeast of the Home Depot and connects at the existing intersection of South Phoenix and Fern Valley Roads. On the west side of the interchange, traffic on Fern Valley Road will cross a new and wider Bear Creek bridge.

“While much of the road system will continue to operate as it does now, the exception will be that eastbound traffic from Highway 99 to I-5 will travel on Boltz Road instead of the current Fern Valley Road,” Leever said.

The IAMP goes before the Oregon Transportation Commission for approval in December. 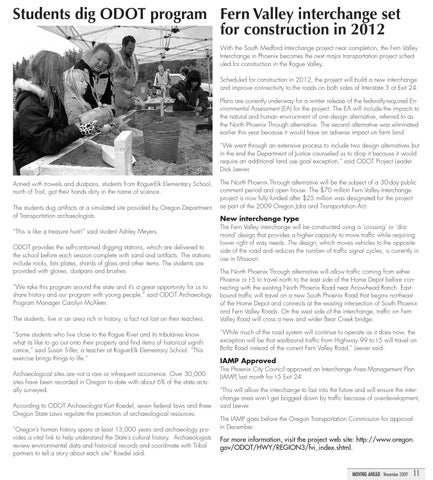