On pace to finish well ahead of its October 2010 completion date, the South Medford Interchange project is wrapping up its last major construction stage, replacement of the Barnett Road-Bear Creek Bridge.

“We have the new Interstate 5 interchange fully open to traffic, so the contractor is working on a fast-track schedule to replace the bridge and reopen Barnett Road to traffic,” said ODOT Project Manager Joe Thomas.

“We had a good break in the weather that allowed us to finish pave everything up to the edge of the new bridge,” Thomas said. “When the road reopens, it will be wider, with bike lanes and sidewalks that match the new bridge.”

‘Monster’ beams arrived early
The longest bridge beams used on the project were scheduled for delivery in October. Their arrival in late September helped advance the work schedule.

“The beams were really amazing to see,” said ODOT Project Information Specialist Gary Leaming. “The beams were delivered from Harrisburg and dominated the construction site.”

Each beam measured 172 feet in length, seven and a half feet in height and weighed more than 86 tons. According to Leaming, the beams were easily the largest of the more than 200 pre-cast bridge beams used in the South Medford Interchange project.

Wildish Standard Paving started making preparations for the bridge replacement in 2008. A work bridge skeleton was built in Bear Creek, which sped up the mobilization efforts to demolish and replace the existing bridge.

Project background
Designed to improve safety and reduce congestion, the South Medford Interchange project constructs nine new bridges with the centerpiece a new I-5 interchange. The new interchange is known as a single point urban interchange (SPUI), a design that handles larger volumes of traffic while using a smaller footprint than traditional interchange designs.

The $70 million project went to bid in 2006 after more than seven years of development and with the City of Medford contributing $15 million. A project Solution Team and Citizens Advisory Committee worked through more than 20 different concepts to develop the final design, the Highland Alternative.

The South Medford Interchange project is the largest state highway project in the Rogue Valley since I-5 was built. 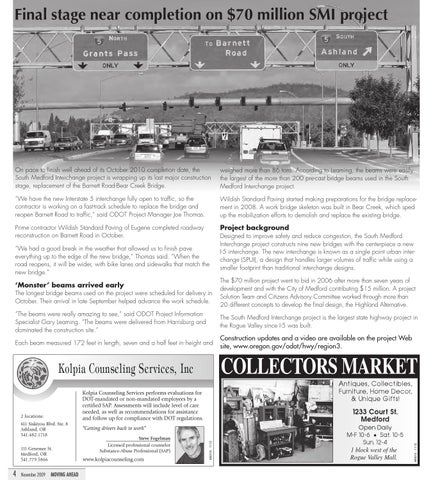