The City of Medford plans to begin construction this summer on the Oregon 62-Owen/Coker Butte project in northeast Medford. The highway project is designed to improve traffic flow, safety, and reduce congestion on both Crater Lake Highway and Crater Lake Avenue.

According to Beskow, the overall cost of the$11.2 million, two-year project makes the following improvements:

• Moves the Cardinal Avenue traffic signal south to the improved Owen Drive, which will become a four-way intersection;

• Closes the existing Webfood and Coker Butte Road intersections east of Oregon 62; and

• Improves Crater Lake Avenue by moving it farther back from the highway at both Owen Drive and the new four-way Coker Butte intersection. This will improve the safety of the intersections by removing the frequent conflicts that arise because the intersections are too close to one another.

Apart from this project, the City of Medford is also in negotiations with WalMart to allow access from Owen Drive to Lear Way between the Costco and WalMart stores. According to Beskow, this will also help improve connectivity in the area.

For more information about the City of Medford project visit online:
www.oregon.gov/ODOT/HWY/REGION3/Oregon62_Owen_Coker_index.shtml. 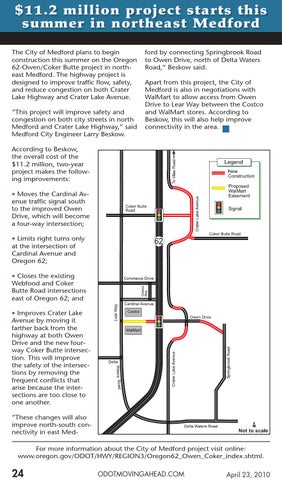