Bicycle/pedestrian improvements on the way

Once construction is complete, bicycling or walking across Green Springs Highway (Oregon 66) Bridge at Interstate 5 exit 14 will be a lot easier than it is today. The exit 14 overpass will receive dedicated bicycle and pedestrian facilities because it is located in a congested area, with development on either side of the freeway. Safely accommodating the movement of bicyclists and pedestrians there is a priority for ODOT and the City of Ashland.

Vehicles heading southbound onto I-5 at exit 14 present a potential hazard to cyclists heading east, where the traffic crosses the bike lane at the entrance to the on-ramp. To address this, ODOT will install a bike signal that is activated by a detector loop, similar to the way traffic signals operate. The bike signal will allow cyclists to cross the entrance to the freeway before vehicles are allowed to turn into the southbound on-ramp. Examples of a similar bike signal are shown on pages 17 and 18.

Bike signals are an emerging transportation technology still relatively new to Oregon. Ashland will be among the first communities to receive one.

“We are pleased to be able to accommodate the City’s request for additional bicycle safety features at exit 14,” said ODOT Area Manager Art Anderson. 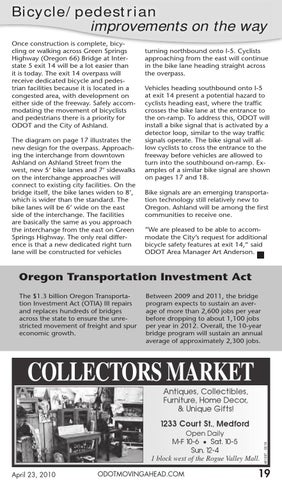