The project team continues work to release the federally-required Environmental Assessment (EA) for the Fern Valley Interchange project. The EA will include the impacts to the natural and human environment of the final design alternative.

“Federal Highway Administration is requiring ODOT to provide a visual simulation of how the roadway will look with the area terrain,” said ODOT Project Leader Dick Leever. “We initially expected to release the EA this month; with this new requirement we’re now looking at early summer.”

The $73 million interchange project, scheduled for construction in 2012, will make improvements with a new type of interchange and provide changes to the connecting roads on either side of Interstate 5.

The Fern Valley Interchange project is fully-funded thanks to the 2009 Oregon Jobs and Transportation Act.
“The JTA investment was great news,” said ODOT Area Manager Art Anderson. “The Fern Valley Interchange project and the Highway 62 project each received a major investment that gets these projects to construction and reflects the good work we’ve done in the Rogue Valley.”

“Once we get the go-ahead from the Federal Highway Administration (FHWA), we’ll ask the public to look over the document and the design and give us their comments,” said Leever. “The public comments will be examined and answered in the revised EA.”

The Fern Valley interchange will be constructed using a ‘crossing’ or ‘diamond’ design that provides a higher capacity to move traffic while requiring lower right-of-way needs.

This interchange design can be constructed for a relatively smaller price tag than more conventional designs. Vehicles crossing the interchange move to the opposite side of the road to either enter Interstate 5 or to cross it, reducing the number of traffic signal cycles for traffic to clear.

The following bullets detail some of the changes drivers will encounter with the new interchange design:

• ‘North Phoenix Through’ design on the east side of I-5 — Traffic coming from either Phoenix or I-5 will travel north to the east side of the Home Depot before connecting with the existing North Phoenix Road near Arrowhead Ranch. Traffic bound for the east Phoenix neighborhoods and Petro Truck Stop will travel on a new South Phoenix Road. This will begin northeast of the Home Depot and connect at the existing intersection of South Phoenix and Fern Valley Roads.

Last year, the project still had two design alternatives on the table – the North Phoenix Through and the Fern Valley Through – a mix of previous concepts and those submitted by the Phoenix Association of Business and Property Owners.

The Fern Valley Through alternative was eliminated late last year because it would have an adverse impact on nearby farm land.

“We went through an extensive process to include two design alternatives but in the end the Department of Justice counseled us to drop the Fern Valley Through alternative because it would require an additional land use goal exception,” said Leever.

“State land-use guidelines state that we have to use the design that doesn’t require an exception.”

According to Anderson, the project’s design phase started in 2004. The design went through a major overhaul in 2006 when local opposition rose against plans to widen Highway 99 in Phoenix.

“The design process has taken much longer than anyone anticipated,” Anderson said. “But, more importantly, we’re at a place now where we have good community support for the solution and the funding to make it happen.”

Last year, the Phoenix Planning Commission recommended approval of the Interchange Area Management Plan (IAMP) for exit 24 and has sent it onto the Phoenix City Council for approval.

The IAMP is a planning document that examines future development near the interchange. This protects the public’s investment in the roadway system.

“This will protect the public investment in the interchange well into the future and ensures the interchange area won’t get bogged down by traffic due to overdevelopment,” said Leever. 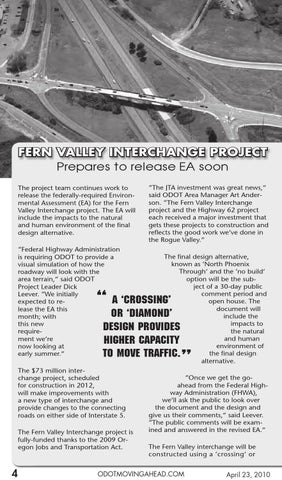