The footprint for the next phase of the Highway 62 Expressway project is nearly complete.

Following a series of public meetings for Unit 2 of the Highway 62 Corridor Project, the project’s Citizens Advisory Committee and Project Development Team selected their preferred alternative, a 4.5-mile expressway that parallels the Old Medco Haul Road between White City and Medford.

The alternative selection is necessary for the federally-required environmental document, known as the Draft Environmental Impact Statement (DEIS).

The footprint for the corridor’s next phase:

• Builds a four-lane section eastbound from Poplar Drive on Highway 62 with the expressway traveling north near Whittle Avenue;

• Allows traffic headed for the retail businesses to remain on the existing Highway 62 as they do today; and

• Makes the expressway continue north just east of the airport property, span Vilas Road and end at a signalized intersection near Corey Road.

ODOT has targeted 2013 target to begin construction of a multi-modal transportation solution that will reduce congestion and improve safety along Highway 62. ODOT traffic analysis shows traffic volume on Highway 62 is almost as high as that found on Interstate 5 and it is expected to double within 20 years.

The Highway 62 corridor in the Medford area has some of the heaviest traffic and congestion issues in southern Oregon.

“The existing Highway 62 corridor will continue to function as a service corridor, providing access to the goods and services people need,” said ODOT Area Manager Art Anderson. “We expect that once constructed, the first phase of this expressway project will move about half of the traffic off the existing highway.”

The 2009 Jobs and Transportation Act dedicated $100 million toward the project. According to Anderson, the project needs another $20 million.

“With a funding shortage it will be imperative for the teams – Jackson County and City of Medford as well as the community – to help us bridge the funding gap,” said Anderson.

“The solution must be built in stages as funding becomes available,” ODOT Project Leader Dick Leever said. “However, Unit 2 provides a multi-modal solution that not only addresses transit, bicycles, and pedestrians but also provides a solid foundation for a Unit 3 project in the future.”

Additional information about Unit 2 of the Highway 62 Corridor Project is available online at www.oregon.gov/odot/hwy/region3. 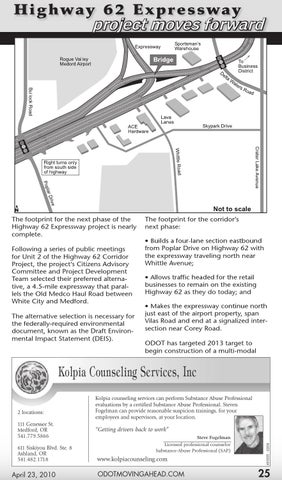