The $72 million South Medford Interchange project went to bid in 2006, following more than seven years of development. Not surprisingly, the population growth in the Medford area was unforeseen when the Interstate 5 interchange was built in 1963.

“When (former Oregon Transportation Commission Chairman) Glenn Jackson dedicated I-5 at the Barnett Road interchange, Medford had about 30,000 people and was a rural community,” said ODOT spokesman Gary Leaming. “Medford is now an urban community and needs an urban interchange.

“This interchange allows traffic to move better in south Medford and will help Medford grow as a community and as a regional commercial center.”

A joint venture with the City of Medford, this was the largest state highway project in the Rogue Valley since I-5 was constructed. The City of Medford contributed $15 million to the project, which was designed to improve safety and congestion.

“This was quite simply the largest project many of us have ever worked on,” said ODOT Area Manager Art Anderson. “The plan sheets alone for this project were nearly 800 pages.”

The project’s centerpiece is the new interchange design, a single point urban interchange (SPUI), which handles large volumes of traffic while minimizing the amount of land required for on-ramps and off-ramps in both the environmentally and developmentally constrained areas associated with Bear Creek, and also in areas to the east and west of I-5. This was only the second SPUI design constructed in the state of Oregon. The other is located in Salem at the Market Street interchange beneath I-5.

“The SPUI is located close to Bear Creek so additional bridges were needed to accommodate the retaining walls for the on- and off-ramps,” Leaming said.

A project Solution Team and Citizens Advisory Committee worked through more than 20 different concepts to develop the best design. The Highland Alternative was identified as the preferred alternative in the Final Environmental Impact Statement required by the Federal Highway Administration.

“The development process took a lot of time but we needed that time to make sure we got it right,” said Anderson. “A project like this changes Medford and the surrounding area, just as the construction of I-5 did back in the 1960s.” 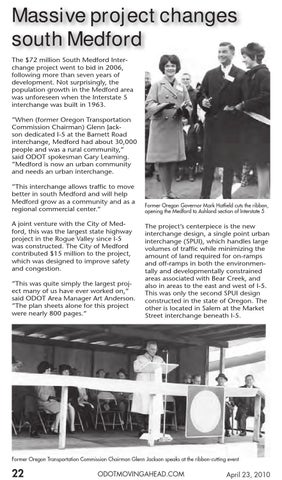