Motorists traveling to the Oregon Coast will find the journey a little smoother with the addition of a new passing lane on Oregon 199 (Redwood Highway) near the community of Wonder.

Prime contractor Copeland Construction of Grants Pass will begin work soon on a one-mile northbound passing lane. According to ODOT Project Leader Jayne Randleman, the Redwood Highway sees the most traffic during the summer months.

According to Randleman, most construction will occur off the highway. While no delays are expected during daylight hours, drivers will encounter short nighttime delays at the end of the project as Copeland Construction completes paving. During that stage, pilot cars will be used to direct traffic through the work zone. 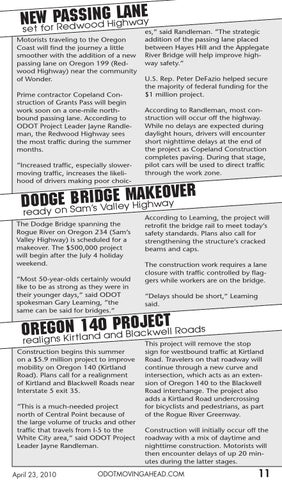