The Rock Point Bridge was unveiled in 1920, a time when Oregon’s paved roads totaled only 620 miles and its designer, Conde B. McCullough, had barely settled in as Oregon’s state bridge engineer.

McCullough would later go on to leave a legacy of beautiful bridges along Oregon’s coast. Both his trademark aesthetics and efficient, custom-designed spans are present in the Rock Point Bridge.

For more information about the rehabilitation work, visit the project web site:
www.oregon.gov/ODOT/HWY/REGION3/234_rock_point_bridge.shtml.

Conde B. McCullough arrived in Oregon in 1916 to teach engineering at Oregon Agricultural College (now Oregon State University). A pioneer of the movement to create a well-planned American highway system, McCullough argued that bridges should be built efficiently, economically, and aesthetically. He became Oregon’s state bridge engineer in 1919. His legacy of beautiful bridges lives today and most of his bridges are considered significant landmarks. 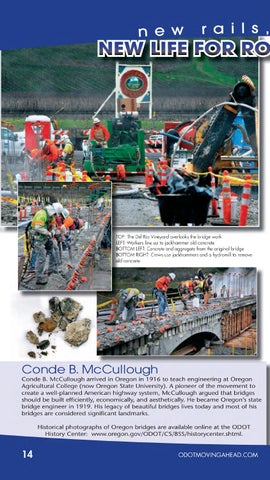