When the Rock Point Bridge closed in September 2009, ODOT announced the bridge rehabilitation project would be completed in eight months.

Problems arose earlier this year when prime contractor Wildish Standard Paving of Eugene found more deterioration in the historic structure than ODOT had originally anticipated. Incomplete drawings dating from the bridge’s original construction in 1920 added to the repair delays.

“For instance, what was thought to be a 8-inch think concrete wall turned out to be 8 feet thick.” said ODOT Public Service Representative Dennis Steers. That affected the contractor’s schedule.”

This repair project isn’t the first for the Rock Point Bridge. Located west of Gold Hill on Oregon 234, the two-lane bridge was built in 1920. A 1953 repair project replaced the bridge’s south approach. In 2000, the bridge underwent expedited repair work to strengthen the crossbeams, lifting a 10,000-pound weight restriction on the span.

Nearby businesses – the Del Rio Vineyard and the Oregon Vortex – rely on the Rock Point Bridge to bring customers from Interstate 5. ODOT had promised these businesses that the bridge would reopen before the 2010 Memorial Day weekend, the official start of the summer tourism season.

Once it was apparent the rehabilitation project would not be completed in time, ODOT directed the contractor to make adjustments so a single lane of traffic would be open from Interstate 5 for the summer tourism season.

“We are going to keep our promise to these businesses,” said ODOT Project Manager Joe Thomas. “Construction work will continue behind a barrier and there may be some night closures to allow critical work to continue but the Rock Point Bridge will be open for the summer.”

According to Thomas, ODOT will allow the contractor to close the bridge again after the Labor Day weekend so the work can be completed.

The $3.9 million rehabilitation project targets the bridge’s damaged deck and side rails as well as cracked concrete beneath the bridge. Wildish Standard Paving is using rebar-enforced concrete to replace the bridge’s original concrete rails and urn-shaped balusters and applying a new bridge deck to the nearly 90-year old historic structure.

The current detour directs drivers to use I-5 exit 40. In addition to coordinating with the Del Rio Vineyard and the Oregon Vortex, ODOT worked with emergency service providers and the Central Point School District to ensure necessary adjustments were made during the bridge closure.

“Surprises happen when you’re working on a structure as old as the Rock Point Bridge,” Thomas said. “Thankfully, we’ve found a short-term solution that will satisfy the local businesses and allow us to get the repairs finished as soon
as possible.” 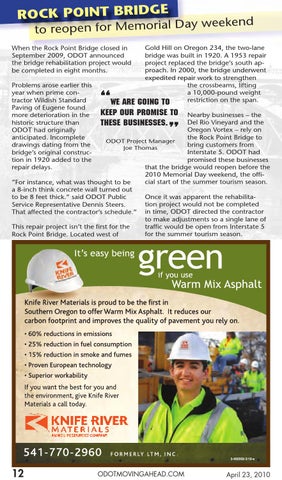