On pace to finish well ahead of the project’s scheduled October 2010 completion date, prime contractor Wildish Standard Paving of Eugene is finishing up the landscaping around the new interchange as well as clean-up work.

The South Medford Interchange project’s final milestone occurred on Jan. 12 when the Barnett Road-Bear Creek Bridge opened to traffic following a six-month closure. The $1.7 million structure was the last of 11 bridges
constructed within the four-year,
$72 million project.

Current federal flood requirements called for the new bridge to be built with a higher elevation to keep bridge supports out of the 100-year floodway. To meet that requirement, the Barnett Road-Bear Creek Bridge features ‘monster’ beams – each of the 15 beams measure 172 feet in length, seven-and-a-half feet in height and weigh more than 86 tons – the largest pre-cast, bridge beams of the more than 200 used throughout the South Medford Interchange project.

“There was a lot of behind-the-scenes work and planning involved in delivering these 15 monster beams,” said ODOT Project Manager Joe Thomas. “Due to their length, the beams had to be directed east down Barnett Road before the crew could back them in to the work site.”

Barnett Road was closed between Alba Drive and Highland Drive to through traffic for six months during the bridge replacement stage. Wildish Standard Paving replaced the bridge and rebuilt the roadway.

The Barnett Road closure significantly impacted six local businesses – the Black Bear Restaurant and Best Western Inn on the south side of the road and the Dairy Queen, Motel 6, Days Inn and Travel Lodge on the north side of the road.

“That was one of the first times these six businesses met together as a marketing group,” said Tom Hawkins, owner of the Dairy Queen on Barnett Road. “There were some good ideas that came out of that meeting…and I found it worthwhile.”

ODOT added signage along the detour routes to direct motorists to the businesses. The Medford Area Chamber of Commerce led a ‘Buy Barnett’ marketing effort during the six-month bridge closure to complement ODOT’s information campaign.

“The project was long for us but during the holidays we could look out at the construction workers on the bridge and knew it would be open soon,” said Grace Grueso, manager of the Black Bear Diner.

Grueso and Hawkins both spoke at a ribbon-cutting event sponsored by the Chamber last January.

“We knew the businesses struggled
during the 180-day bridge closure,” said ODOT spokesman Gary Leaming, “but we were optimistic that, once
Barnett reopened, business would come roaring back.”
Leaming and ODOT Area Manager Art Anderson gave a brief presentation to the Medford City Council in February, acknowledging the joint venture and the City of Medford’s $15 million contribution to the project. Leaming handed out cupcakes decorated with project signs to commemorate the partnership.

“We wanted to recognize the great partnership we have with the City of Medford,” Anderson said. “This partnership has done great things. Not only did it jump start the South Medford Interchange project but it has set the example for project development in the region and statewide.” 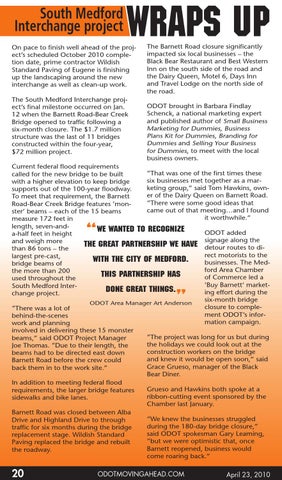