The Fern Valley Interchange experiences traffic congestion throughout the day, especially during the morning and afternoon commute. New and proposed development on the east side of Interstate 5, and development growth within the Rogue Valley, are choking the interchange’s capacity and causing safety concerns.

“We were asked to provide a visual simulation of how the roadway will appear with the area terrain,” said ODOT Project Leader Dick Leever. “Once we get approval from FHWA, we’ll ask the public to look over the document and the design and give us their comments.”

The North Phoenix Through design alternative and the no build option will be the subject of a 30-day public comment period and open house. The document will include the design’s impacts to the natural and human environment.

The purpose of the Draft EA is to evaluate the design alternative. Public comments are included and addressed in the Revised EA.

The $73 million project is scheduled to begin construction in 2012, will make improvements with a new type of interchange and provide changes to the connecting roads on either side of I-5.

The Fern Valley interchange is expected to be constructed using a ‘crossing’ or ‘diamond’ design that provides a higher capacity to move traffic while requiring lower right-of-way needs.

The Missouri Department of Transportation was the first agency to construct an interchange of this design in the United States. This interchange design can be constructed for a relatively smaller price tag than more conventional designs, and is safer because there are fewer conflicting moves. Vehicles crossing the interchange move to the opposite side of the road to either enter I-5 or to cross it, reducing the number of traffic signal cycles for traffic to clear.

Project design background
The Fern Valley Through design alternative was eliminated late last year, on the counsel of the Department of Justice, because it would have an adverse impact on nearby farm land.

The project’s design phase started in 2004 and went through a major overhaul in 2006 when local opposition rose against plans to widen Highway 99 in Phoenix.

“The design process has taken much longer than we anticipated,” said ODOT Area Manager Art Anderson. “But, more importantly, the project now has good community support and the funding to make it happen.” 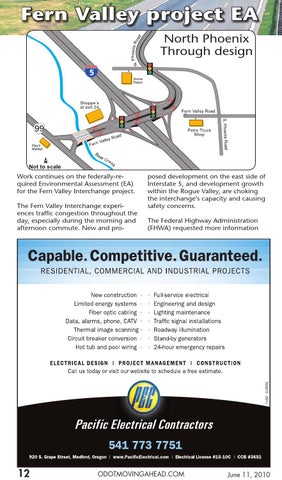