“This hasn’t been a typical bridge replacement project on I-5,” said ODOT Area Manager Art Anderson.

Constructing the bridges at exit 55 was a challenge because the location is on the edge of a hillside.

“We couldn’t take advantage of pre-stressed concrete girders because this section of I-5 is on a curve and has a tilt, or super, to accommodate traffic at interstate speeds,” said Anderson.

The agency’s $1.3 billion OTIA III State Bridge Delivery Program is repairing and replacing hundreds of bridges across the state to ensure the unrestricted movement of freight and spur economic growth.

Oregonians had not seen an investment of this magnitude in highway

and bridge construction since the state’s interstate freeway system was built in the 1950s and ’60s.

Through 2009, the bridge program created or sustained more than 16,000 jobs. Overall, the 10-year bridge program will sustain an annual average of approximately 2,300 jobs.

In 2008, the program spent more than $215 million on construction, design and program management. Of those expenditures, 85 percent went to Oregon firms. Since work started in 2003, businesses and individuals have earned more than $750 million after taxes. 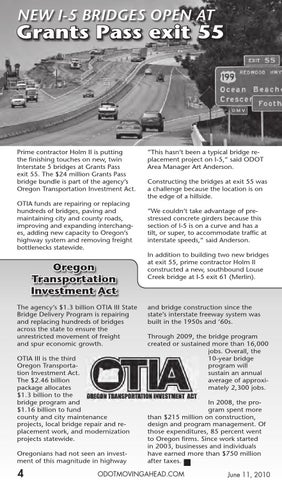