The City of Medford plans to host an open house before construction begins to allow residents and commuters another opportunity to see how the project will function when completed and how the contractor intends to stage the project.

“This project will improve safety and congestion on both city streets in north Medford and Crater Lake Highway’, said Medford City Engineer Larry Beskow. “We’ve done an extensive mailing to nearby residents and businesses in the immediate project corridor to inform them of the project and the changes it will bring.”

The two-year project makes the following transportation improvements:
• Moves the Cardinal Avenue traffic signal south to the improved Owen Drive, which will become a four-way intersection;
• Limits right turns only at the intersection of Cardinal Avenue and Oregon 62;
• Closes Webfoot and Coker Butte Road intersections east of Oregon 62; and
• Improves Crater Lake Avenue by moving it farther east from the highway at both Owen 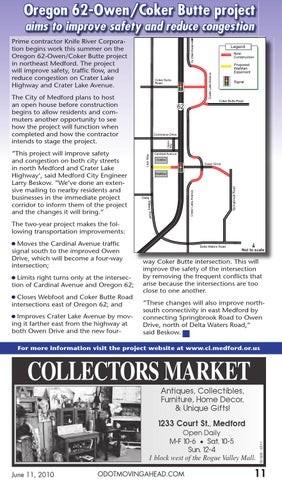