Strong transportation partnerships and the recent success of the South Medford Interchange project well position the Rogue Valley to build upon its past successes as Oregon enters a new generation of transportation investment.

But getting consensus on what constitutes an efficient, effective transportation system, how to pay for it, and how to preserve its functionality is challenging, if not impossible. Especially challenging is developing substantial agreement on the sometimes-necessary trade-offs between transportation improvements and preserving community values, protecting the natural environment, or reducing public expenditures.

South Medford Interchange — (a) The funding and planning partnerships between ODOT and the City of Medford on this project are role models for collaboration between state and local jurisdictions and show that local funding can make difficult state projects possible. (b) The innovative design of the new interchange functions much better than the old one and reduces the project footprint. (c) Separating the state system components — Interstate 5 and the interchange — from the local arterial Barnett Road enables them both to perform their respective roles more effectively.

American Recovery and Reinvestment Act (federal stimulus) Projects — Whatever one thinks of the federal stimulus program, ODOT and local jurisdictions expended Oregon’s share of the transportation funding efficiently on projects that needed to be done in any event. Several projects in the Rogue Valley provided construction jobs at the time they were needed most. Without the spending from these transportation-related jobs, the Rogue Valley’s economic downturn would be even deeper and longer.

Rest Areas — ODOT recently transferred responsibility for operation and maintenance of several I-5 rest areas to the Travel Information Council, including the Manzanita rest areas north of Grants Pass. The change will allow local communities to promote area attractions and highlight local businesses, while improving parking and landscaping and offering coffee.

Hard decisions about specific projects, non-highway modes, and transportation-related land use, air quality, and funding issues are on the near horizon. ODOT will not have the resources to tackle every problem or opportunity, and its handling of the critical ones it does undertake surely will not please everyone. But with support from our legislators, insights from local jurisdictions, guidance from Area Commissions on Transportation and Metropolitan Planning Organizations, and input from active citizens, major mobility enhancements are possible even in an era of strong differences of opinion and shrinking resources.

I’ll touch more on shrinking resources in the next issue.

About David Lohman
The Governor appointed David Lohman of Jacksonville to the Oregon Transportation Commission in January 2008. He is a lawyer in private practice in Medford and Ashland. 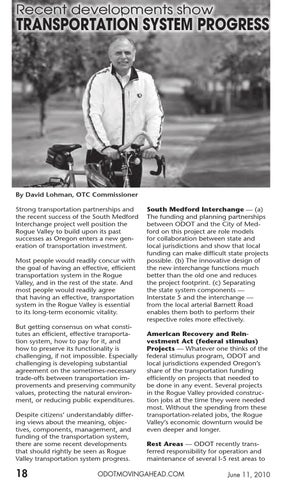