Rogue Valley transportation advocates instrumental in the approval, funding and construction of the $72 million South Medford Interchange project joined together May 11 to commemorate the project’s completion.

Current Oregon Transportation Commissioner David Lohman and his predecessor Stuart Foster attended the ceremony, which included the unveiling of a marble plaque that will be mounted at the new interchange.

ODOT Deputy Director Doug Tindall expressed gratitude to the Rogue Valley Area Commission on Transportation and local transportation leaders for their work on the interchange project.

A joint venture with the City of Medford, the South Medford Interchange project was designed to improve safety and congestion.

“This interchange allows traffic to move better in south Medford and will help Medford grow as a community and as a regional commercial center,” said ODOT Area Manager Art Anderson.

A joint venture with the City of Medford, this was the largest state highway project in the Rogue Valley since I-5 was constructed. The City of Medford contributed $15 million to the project, which helped the local street network and by adding sidewalks and bike lanes.

The project’s centerpiece is the new interchange design, a single point urban interchange (SPUI) that handles large volumes of traffic while minimizing the amount of land required for on-ramps and off-ramps. This was only the second SPUI design constructed in the state of Oregon. The other is located in Salem at the Market Street interchange beneath I-5.

The project completion ends more than 10 years of planning, and meetings at the city and neighborhood level. The design eventually constructed was thoroughly studied in a federally-required Environmental Impact Statement. 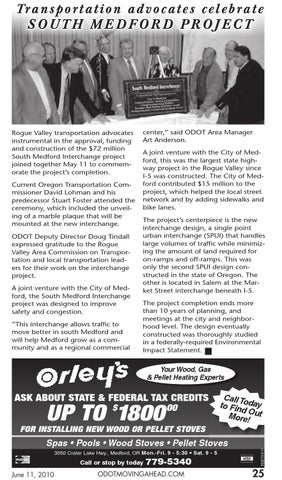