Oregon has used smart transportation investments and its strategic geographic location to attract the flow and manufacture of traded goods. As a result, manufacturing and trade are central to Oregon’s economy – much more so than in most other states.

Manufacturing and the transport of externally-traded goods are still Oregon’s best hope for short-term economic recovery and long-term growth, despite the current downturn in world trade.

However, this hope is tenuous.

Oregon’s transportation system has not kept up with demand. Comparatively, Oregon’s highways are not as bad as some other states’. If you’ve driven Interstate 5 from Redding to Sacramento or many roads in Idaho, you know what I mean. In some parts of Oregon, however, congestion is significantly slowing the flow of goods, as well as commuters. And across the state, deteriorating pavement and bridges are producing potholes, cracks and safety hazards.

Federal and state gas taxes, which provide most of the funding for Oregon’s transportation system, did not increase from 1993 to 2009, despite major increases in fuel prices.  Fortunately, with strong support from business and local governments, the 2009 Oregon Legislature enacted an increase in fuel taxes and vehicle-related fees that will be taking effect over the next few years. Additionally, prior dedication of some lottery-generated funds and creative use of bonding authority are helping address critical transportation needs.

Even with these recent boosts to the state’s share of transportation funding, the backlog of unmet transportation needs is expected to grow over the next few decades unless further fairly dramatic steps are taken.

What accounts for this backlog? Apart from inflation and declining gas tax revenues because of better gas mileage, are the available funds being well spent? Are they being spent on projects of greatest benefit to the state’s transportation system? Are these funds getting diverted to meet non-transportation needs?

Meaningful answers to most of these and similar questions take more than a few sentences. But a few points in the limited space afforded here may at least provide some background for further discussion.

Interestingly, however, the “silo effect” that results from these well-intended limitations sometimes rules out consideration of potentially more effective solutions to a particular transportation problem. At least in some cases, expanding highways or building new ones can end up being more costly in terms of budgets, as well as lifestyle impacts, land consumption and air quality, than developing our new urban areas in ways that tend to limit demand for roadway capacity and foster busing, biking  and walking.  But funding for transportation facilities other than highways is extremely limited.

Sometimes, the inflexibility of the transportation funding silos even requires expenditures on new roads at the expense of funding for critical maintenance on existing highways.

Insufficient and inflexible funding sources for meeting growing transportation needs are not problems unique to Oregon.  But Oregon’s high dependence on transportation as a mainstay of our economy makes it important for Oregon to make the smartest possible transportation decisions. We need to become — and, in the world of companies that transport goods, to be known as — a leader in developing transportation policies, programs and funding mechanisms that respond to the foreseeable realities of significant demographic changes, declining gas tax revenues, constrained land availability, and stricter air pollution limits.

About David Lohman
Appointed to the Oregon Transportation Commission in January 2008, David Lohman is a lawyer in private practice in Medford and Ashland. 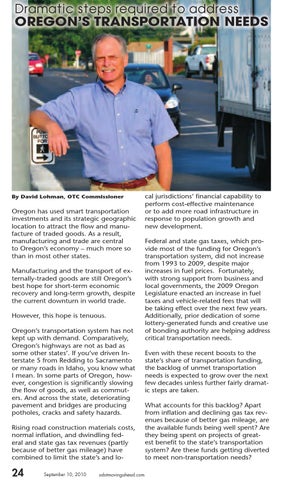