A parade of antique cars from throughout the Rogue Valley cruised across the newly rehabilitated Rock Point Bridge, marking the successful completion of the yearlong construction project.

Nearly a hundred people, including Miss Oregon Stephenie Steers, attended the celebration, held at the entrance of Del Rio Vineyard on the rainy, threatening afternoon of October 28.

Originally part of the old Pacific Highway, the historic arched bridge spans the Rogue River northwest of Gold Hill and is a key connector that links Interstate 5 traffic to tourism-related businesses like the Del Rio Vineyard and the House of Mystery.

The $3.9 million rehabilitation project targeted the bridge’s damaged deck and side rails as well as cracked concrete beneath the bridge. Prime contractor Wildish Standard Paving of Eugene used rebar-enforced concrete to replace the bridge’s original concrete rails and urn-shaped balusters and applied a new bridge deck to the nearly 90-year old historic structure.

“The success of this project was built upon our teamwork with Wildish Standard Paving and the local businesses and agencies,” said ODOT Area Manager Art Anderson. “We kept our promise to the community while maintaining the bridge’s beauty and making it safe and functional for future generations.”

The Rock Point Bridge was designed by Conde B. McCullough, a pioneer of the movement to create a well-planned American highway system. McCullough illustrated how form could complement function and the nearby landscape. Using a reinforced concrete deck arch, he designed a 505-foot span bridge over one of the rockiest sections of the Rogue River, hence the name Rock Point.

Difficulties arose during the bridge rehabilitation project when more deterioration was found in the historic bridge than ODOT had anticipated. Part of the cause was incomplete drawings dating from the bridge’s original construction in 1920, adding to the repair delays.

When it became apparent the rehabilitation project would not be completed within the original timeline, ODOT adjusted the project plans to reopen a single lane of traffic for the summer tourism season. ODOT distributed detour maps to local businesses and placed detour signs in the area to assist drivers traveling back to I-5.

Bridge history
The Rock Point Bridge was unveiled in 1920, a time when Oregon’s paved roads totaled only 620 miles and its designer, McCullough, had barely settled in as Oregon’s state bridge engineer. McCullough would later go on to leave a legacy of beautiful bridges along Oregon’s coast. Both his trademark aesthetics and efficient, custom-designed spans are present in the Rock Point Bridge.

Conde B. McCullough
McCullough arrived in Oregon in 1916 to teach engineering at Oregon Agricultural College (now Oregon State University). A pioneer of the movement to create a well-planned American highway system, McCullough argued that bridges should be built efficiently, economically, and aesthetically. He became Oregon’s state bridge engineer in 1919.

His legacy of beautiful bridges lives today and most  of his bridges are considered significant landmarks. Historical photographs of Oregon bridges are available online at the ODOT History Center: www.oregon.gov/ODOT/CS/BSS/historycenter.shtml. 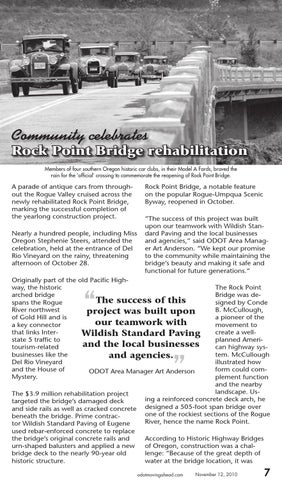