A few weeks ago, ODOT announced the award of 41 ConnectOregon III grants across the state.  From among the 97 initial applications, Jackson and Josephine County received three grants totaling $4.8 million.  (Note: these figures do not take into account a special set-aside for competitive ConnectOregon III grants to small airports.)  These grants benefit Southwest Oregon in strikingly diverse ways.

One of these grants will enable Mercy Flights, which serves a 150-mile radius area from Medford, to build a new operations center and hangars for its air and ground ambulance services.

The second grant will enable the Rogue Valley Transportation District to build high-capacity infrastructure for compressed natural gas (CNG) refueling of its fleet of buses and the fleets of other private and public entities in the region, as well as individual citizens’ future CNG vehicles.

The third grant will help preserve freeway capacity and reduce freeway maintenance costs by facilitating the transfer of some freight shipments from truck to rail.

The ConnectOregon program was proposed by the Governor and approved by the legislature to address some critical problems in Oregon’s transportation system.

First, we don’t have a transportation system.  We have a hodgepodge of transportation facilities and equipment.  Some are privately owned and operated; some are publicly owned (by over 300 separate Oregon jurisdictions) and used by both private and public sector transportation service providers.

Second, we don’t have a coherent way of prioritizing transportation projects or services.  In large part, this is because there are so many different jurisdictions and transportation service providers (both public and private), each legitimately concerned about its own responsibilities and budget.

Third, we don’t have funding sources flexible enough to allow us to select the most effective ways of addressing the transportation problems we encounter.  The gas tax, for example, cannot be used to fund a freight rail project even if it would help conserve highway capacity and postpone future roadway improvement costs.

The selection processes for the three rounds of ConnectOregon utilized advisory groups made up of transportation stakeholders and regional representatives to select the 172 highest priority multimodal and aviation projects from the 345 applications submitted.  The selection process was designed to mostly disregard the multiplicity of owners and providers of transportation facilities and services and to focus instead on cross-jurisdictional, cross-ownership, and cross-modal benefits to particular regions or the state as a whole.

ConnectOregon, however, has been only a stop-gap measure and will face stiff competition in the budget shifting and cutting that will have to occur in the next legislative session.

But ConnectOregon has clearly served as a valuable demonstration project. Using lottery dollars, it has filled some critical transportation gaps by advancing a few mostly small, high-gain projects that could not have been funded through traditional transportation funding sources. ConnectOregon has also demonstrated that getting the most out of our transportation infrastructure and minimizing its costs to budgets, communities, and natural resources (especially air and water) has to involve rethinking the sources of funding for transportation and using those limited funds more strategically.

ConnectOregon was not designed or funded to stitch the many components and constituents of transportation in Oregon into a truly integrated system.  Achieving such a transportation transformation will require creativity, flexibility and leadership from ODOT staff, the Oregon Transportation Commission, legislators, and the owners, operators, and users of the unsystematic transportation “system” we now have.

About David Lohman
Appointed to the Oregon Transportation Commission in January 2008, David Lohman is a lawyer in private practice and a partner in the Medford and Ashland law firm Huycke, O’Connor, Jarvis & Lohman LLP. 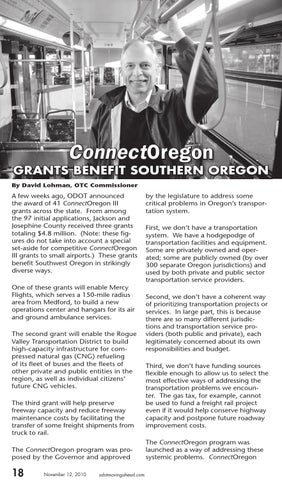