The opportunity to comment on the Environmental Assessment (EA) for the Fern Valley Interchange project runs through Tuesday, November 16.

The Draft EA evaluates the “North Phoenix Through” design alternative and the no-build option. Public comments are included and addressed in the Revised EA.

The Interstate 5 interchange (exit 24) experiences traffic congestion throughout the day, especially during morning and afternoon commutes. New and proposed development on the east side of I-5, as well as development growth within the Rogue Valley, are choking the interchange’s capacity and causing safety concerns.

“We are receiving a lot of public input,” said ODOT Project Leader Dick Leever. “It is excellent to see the community take an active interest in developing transportation solutions.”

The project’s design phase started in 2004. The “Fern Valley Through” design alternative was eliminated in 2009 because it would have an adverse impact on nearby farm land.

The $73 million Fern Valley interchange project could be constructed using a crossing-diamond design that provides a higher capacity to move traffic safely while reducing right-of-way needs. Vehicles crossing the interchange move to the opposite side of the road to either enter I-5 or to cross it, reducing the number of signal cycles for traffic to clear. 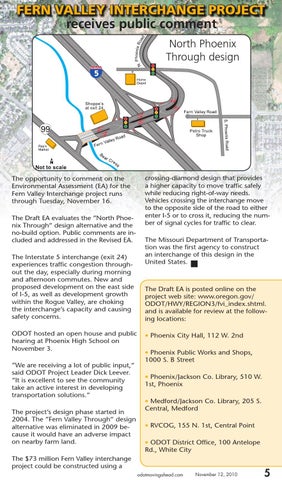