Construction work will continue on the east side of Oregon 62, as work focuses on building the new Owen Drive intersection. When finished, drivers will use a new four-way, signalized intersection that connects the shopping center, Owen and Springbrook Drive in east Medford.

“The tie in from Springbrook Drive to Owen and Crater Lake Avenue is now complete,” said City of Medford Project Manager Dennis Hart.

Since construction began last summer, prime contractor Knife River Corporation has focused its work primarily on Crater Lake Avenue and Webfoot Drive. The goal this winter is to connect the new intersection. Next spring, the contractor will begin tying in the north portion of the project realigning Coker Butte Road.

The work on the east side of Oregon 62 realigns Crater Lake Avenue. Blue business access signs have been up to notify motorists that both driveways and businesses are open during construction.

“Through the winter, this area will still be an active work zone, so whether drivers are on the avenue or highway, they still need to pay attention,” said Medford City Engineer Larry Beskow.

• Improves Crater Lake Avenue by moving it farther east from Oregon 62 at both Owen Drive and the new four-way Coker Butte intersection. This will improve the safety of the intersection by removing the frequent conflicts that arise because the intersections are too close to one another. 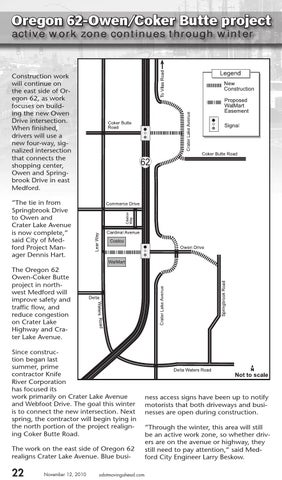