Ashland’s Water Street Bridge is slated for repairs in 2011. The bridge, which handles northbound traffic on Lithia Way near the Ashland Plaza, needs strengthening and repairs to avoid posting load limits that would keep heavier vehicles, from commercial trucks to fire trucks, off the structure.

“The bridge is 55 years old and, like many things of that age, it needs some work,” said ODOT Project Leader Jayne Randleman.

Last summer, ODOT bridge inspectors examined the bridge and found moderate cracking in the girders and cross beams underneath the bridge as well as the need to strengthen the bridge deck.

ODOT currently estimates the repair project could take up 12 weeks to complete. The project is expected to start in late winter or early spring due to temperature requirements. However, the agency is working with nearby businesses and residents as well as the Ashland Chamber of Commerce to develop a schedule with the least disruption possible, finishing up no later than Memorial Day weekend, the official start of the summer tourism season.

“If we don’t fix the bridge, Ashland’s economy will suffer,” Randleman said. “The bridge plays an important role for local businesses that need goods delivered and shipped along Lithia Way.

“Our goal is to reduce construction impacts and avoid as much of the Oregon Shakespeare Festival as possible. We understand its importance to the community.”

Earlier this month, ODOT hosted an open house at the nearby Plaza Inn for adjacent businesses and neighbors. The event provided construction information and gauged concerns regarding the work schedule.

The repair project includes drilling and installing about 600 shear anchors into the concrete beams. The drilling phase is the noisiest of the project and necessitates reducing Lithia Way traffic to a single-lane configuration.

“The drilling noise is equal to what you would find on a typical, urban street,” said ODOT Senior Bridge Engineer Bob Grubbs. “We’re talking about 90 decibels if you’re standing right next to the work. It is like running a food processor in your kitchen.”

The first stage of the project will occur under the bridge. The contractor will inject an epoxy-based glue in the interior girders and the cross beams. Lithia Way traffic will not be affected. However, this stage will require a week-long closure on Water Street to all vehicles.

The rehabilitation project is expected to cost $500,000. 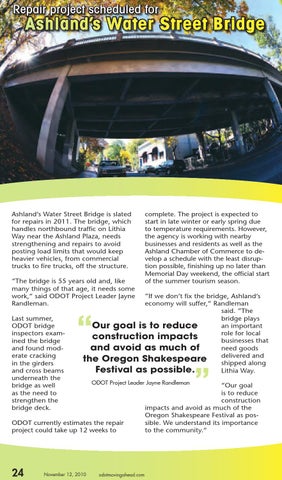