Over the past decade, the Oregon Transportation Investment Act repaired and replaced hundreds of bridges, focusing on removing freight bottlenecks statewide. Now, the agency is undertaking a bridge rehabilitation project this summer that touches back to its creation in 1913.

Scheduled for rehabilitation are the Dollarhide and Steinman Overcrossings located on the Old Siskiyou Highway (Oregon 273), the first two bridges engineered by the State Highway Department.

The project, scheduled for completion at the end of the summer, involves replacing bridge rails; cleaning and repairing cracked walls and spalled (flaking) girders; removing and replacing the road surface; and rehabilitating the historic rock wall.

The construction work requires a six-week closure on each bridge with the Steinman Overcrossing scheduled first. The rest of the work can be completed with flaggers providing traffic control.

“Signing will be up weeks in advance of the bridge closures,” said Public Service Representative Dennis Steers. “We’ve worked closely with emergency service providers, the US Postal Service, and newspaper carriers to prepare for the bridge closures.”

Primarily used by homeowners living along the Old Siskiyou Highway, the Steinman (mile point 3.6) and Dollarhide (mile point 4.7) Overcrossings are load-limited to prevent heavier vehicles from crossing the bridges.

“This rehabilitation project won’t change load limits on these bridges,” said Bridge Engineer Bob Grubbs. “The repairs are only designed to maintain the current capacity.”

Steers added that the low traffic volume on the Old Siskiyou Highway doesn’t warrant the need for a larger repair or replacement project. The project’s overall budget is $955,000.

Transportation history
The cost to construct these two bridges was shared by the state, Jackson County and the Southern Pacific Railroad.

“Jackson County was proactive in tapping the state’s engineering expertise to design the bridges for consistency and state funding,” said Historian Christopher Bell. “The State Highway Department was looking for an opportunity to provide technical oversight.”

Historic Highway Bridges of Oregon, by Dwight A Smith, James B. Norman, and Pieter T. Tykman, notes the “[Steinman Overcrossing] is the only known switchback on Oregon’s highway system where the roadway passes both under and over the structure.”

According to Bell, a lot of drama was associated with the construction and the project ran into cost overruns ultimately resolved in court. However, the rough beginnings didn’t detour the State Highway Department.

“The Dollarhide and Steinman Overcrossings started the department’s work on US 99. The Department was also beginning to focus on another well known roadway, the Columbia River Highway,” Bell said. From it’s inception, the state highway department was interested in building a modern road network around Oregon.” 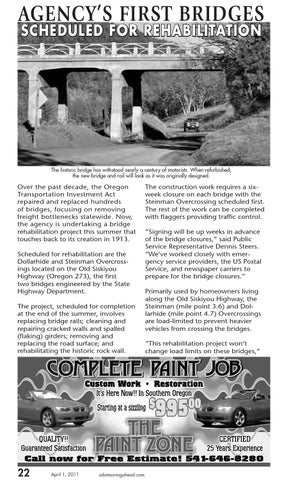