Construction crews at Ashland’s Interstate 5 exits – exit 14, the Green Springs Highway (Oregon 66) and exit 19, the north Ashland interchange – made strides during the winter.

At exit 14, prime contractor Concrete Enterprises of Stayton set sixteen concrete bridge beams on either side of the existing exit 14 bridge. The next stage of the bridge widening project is underway with crews doing concrete work to tie the new supports to the top of the bridge.

The contractor also completed work to lower the I-5 roadbed so that it meets today’s clearance standards (17.4 feet).

“Traffic is flowing about as well as can be expected,” said Public Service Representative Dennis Steers. “Keeping southbound I-5 traffic on a median detour helps the contractor work in the bridge widening and gives workers a safe refuge off of the Ashland Street overpass.”

Once the exit 14 project is completed, the refurbished bridge will have two travel lanes, a center turn lane, bicycle lanes and sidewalks. Lighting, traffic signals and a short median on the west side of the interchange are also part of the new design.

“The plan right now is to get traffic on the new bridge by Memorial Day,” said Steers. “Then, the contractor can tear down the other half of the old bridge and build a new one where the existing structure is now.”

According to Steers, much of the winter construction work was off the roadway, so local traffic on Valley View Road was unaffected.

The existing I-5 exit 19 bridge is being replaced with a wider structure. The new bridge will provide two 12-foot travel lanes, a center turn lane, and widened shoulders on a slightly different alignment. The exit 19 bridge design is a simplified version of exit 14.

Art Deco theme
A nine-member Aesthetic Advisory Committee, appointed by the City of Ashland to make design recommendations for the project, recommended an Art Deco theme for the bridges. The new bridges will feature artistic treatments that reflect downtown Ashland’s historic architecture and natural environment.

Both interchanges will be painted a light tan color to match their natural surroundings and new landscaping will be included.

“When the two projects are finished, the Ashland exits are going to look completely different,” Steers said, “The bicycle and pedestrian improvements should really please everyone.”

The two construction projects are scheduled for completion by mid-2012. 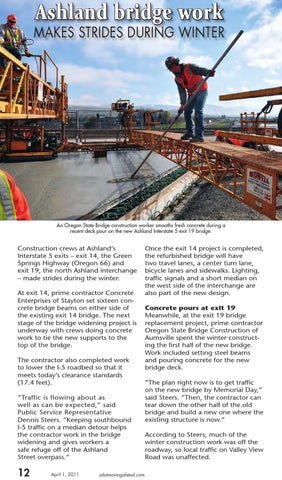