The Phoenix City Council’s recent approval of the Interchange Area Management Plan for exit 24 cleared the way for design work to continue on the $73 million Fern Valley Interchange project, which is scheduled to begin construction in 2014.

A February presentation by Area Manager Art Anderson to the Phoenix City Council detailed the need for the council to approve the IAMP in order to avoid losing project money.

“Our agency had serious concerns whether the Fern Valley Interchange project was moving forward,” Anderson said. “Other state projects are in search of funding and, had this project stalled out any longer, it could have been picked off without a show of public support.”

City council members raised concerns over a water line conflict that is estimated to cost $1.8 million. Although ODOT cannot pay to resolve the water line conflict due to its location in the right of way, the agency pledged to work with the city and the development community to find a solution that is more manageable for the City of Phoenix.

The IAMP, a requirement of the Oregon Transportation Commission, won’t take effect until the project goes to bid in 2013.

According to Planning Manager Mike Baker, the IAMP’s purpose is to preserve the capacity of the interchange for at least the first 20 years of its design life as well as other roads in the vicinity of the interchange. The IAMP also protects their functional integrity, operations, and safety.

“The IAMP strikes a balance between protecting the function of the interchange and the public’s investment while allowing the maximum amount of development in the Phoenix area,” Baker said.

The problem
The Interstate 5 Phoenix interchange (exit 24) experiences traffic congestion throughout the day, especially during morning and afternoon  commutes.

Existing and proposed development along the east side of I-5, as well as development growth within the Rogue Valley, are choking the interchange’s capacity and causing safety concerns.

The solution
Prior to the IAMP approval last February, the Project Development Team unanimously supported the “North Phoenix Through” build alternative as part of the federally-required Environmental Assessment.

The project’s design phase began in 2004. The “Fern Valley Through” design alternative was eliminated in 2009 because it would have an adverse impact on nearby farm land.

ODOT will construct the Fern Valley Interchange project using a crossing-diamond design that provides a higher capacity to move traffic while reducing right-of-way needs. Vehicles crossing the interchange move to the opposite side of the road to either enter I-5 or to cross it, reducing the number of signal cycles for traffic to clear.

For more information about the Fern Valley Interchange project visit the website: www.oregon.gov/odot/hwy/region3/fvi_index.shtml. 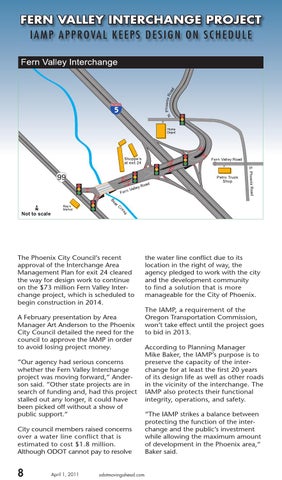