Jackson County figures in 2010 and 2009 indicate a steady decline in the number of traffic fatalities since a high of 45 deaths in 2004, according to the Sheriff’s Office Traffic Program.

According to Program Manager Sandy Nelson, the encouraging news is related to increased education and enforcement. For the past 16 years, the Traffic Program has provided safety education for Jackson County drivers. The Traffic (enforcement) Team was later established in 2003.

For more information about the Jackson County Sheriff’s Office Traffic Program, go online to www.co.jackson.or.us and select “Sheriff” under the departments menu.

Traffic fatality statistics have some interesting twists for 2010
• There were 15 fatal crashes, 16 total victims;
• Three deaths were alcohol and/or drug involved, with three victims in those crashes;
• Of the 16 deaths, 12 persons killed themselves;
• Of the 16 victims, 13 were males, three female;
• Of the at-fault drivers, 12 were males and three were female;
• The youngest traffic fatality was an 18-year old passenger, the oldest was an 87-year old driver;
• The 51-60 age group were the most most frequent at fault drivers;
• The 51-60 age group had the most victims;
• 5.5 percent of deaths were alcohol and/or drug involved (national rate in 2009 was 33 percent)
• Of the three alcohol-involved deaths, two were pedestrians who were impaired and stepped in front of traffic and were struck and killed;
• Only one crash was caused by an impaired driver in Jackson County in 2010. 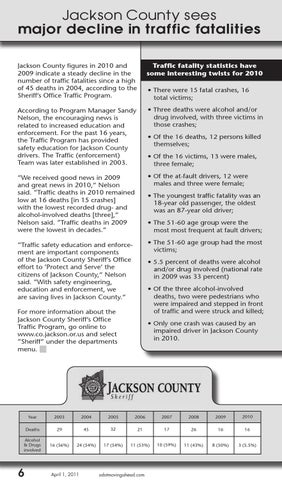