Stepping back 20 years ago, much of Interstate 5 in southern Oregon looked similar to when the highway was first constructed in the 1960s. Today, major transportation investments along a 35-mile stretch of I-5 from the California border north through Medford not only improved the highway’s operation but also its aesthetic appeal.

Two more projects that will enhance I-5 are on the horizon: the Siskiyou Rest Stop/Welcome Center located south of Ashland and the Fern Valley Interchange project in Phoenix. Both projects are in the design phase and scheduled for construction in 2014.

ODOT and Travel Oregon are working together to build a new rest stop and welcome center for visitors traveling north out of California.

The new facility will feature state-of-the-art construction and sustainable landscaping to reflect Oregon’s commitment to environmental stewardship. As part of the project’s development, a restroom facility was constructed at the Ashland Port of Entry to accommodate the commercial trucking industry and separate them from other drivers.

“This will be a great opportunity to develop and enhance tourism efforts in Oregon while improving safety for drivers,” said Anderson.

When the exit 14 project is completed, the refurbished bridge will feature two travel lanes, a center turn lane, bicycle lanes, sidewalks as well as lighting, traffic signals and a short median.
The exit 19 bridge is being replaced with a wider structure that will provide two 12-foot travel lanes, a center turn lane, and widened shoulders on a slightly different alignment.

The new bridges will feature artistic treatments that reflect downtown Ashland’s historic architecture and natural environment. A nine-member Aesthetic Advisory Committee, appointed by the City of Ashland, recommended an Art Deco theme for the bridges. The two construction projects are scheduled for completion by mid-2012.

“When (former Oregon Transportation Commission Chairman) Glenn Jackson dedicated I-5, Medford had about 30,000 people and was a rural community,” said spokesman Gary Leaming. “The interchange allows traffic to move better in south Medford and will help Medford grow as a community and as a regional commercial center.”

A joint venture with the City of Medford, the project’s centerpiece is the interchange design, a single point urban interchange, which handles large volumes of traffic while minimizing the amount of land required for on-ramps and off-ramps in both the environmentally and developmentally constrained areas associated with Bear Creek, and also in areas to the east and west of I-5. This is only the second SPUI design constructed in the state of Oregon.

Fern Valley Interchange
The exit 24 interchange experiences traffic congestion throughout the day, especially during morning and afternoon commutes. ODOT will construct the $73 million Fern Valley interchange project using a crossing-diamond design that provides a higher capacity to move traffic while reducing right-of-way needs. Vehicles crossing the interchange move to the opposite side of the road to either enter I-5 or to cross it, reducing the number of signal cycles for traffic to clear.

Oregon will be the third state to construct an interchange of this design in the United States.
“Community support is key for large transportation investments,” Anderson said. “Thankfully, the Rogue Valley has been proactive and continues to lead by example.

“Looking at the improvements that have already taken place it is exciting to think what else we can achieve over the next 20 years.” 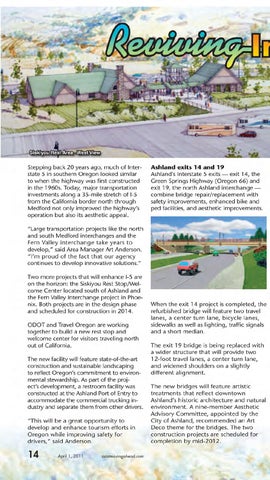