US 199 RCC to Dowell RoadSafety project starts this summer

The second phase of transportation improvements developed through the US 199 Expressway project will begin construction west of Grants Pass on the Redwood Highway (US 199) this summer.

Knife River Corporation of Central Point is the prime contractor for the $5.3 million project, known as US 199 RCC (Rogue Community College) to Dowell Road. The project is scheduled to begin in April and wrap up in October.

The project is designed to separate oncoming Redwood Highway traffic with a low-level median and install a new signal at Dowell Road. A new multi-use path will be constructed for bicyclists and pedestrians on the north side of the Redwood Highway between Dowell Road and Hubbard Lane.

“The second phase of the US 199 Expressway project will go a long way toward making the highway safer for drivers,” said Project Leader Jayne Randleman. “This is the engineering component that ties in to the education and enforcement efforts seen along the corridor for nearly a decade.”

Design and development of the US 199 Expressway project began with a federally-required study of the corridor in 2006 that included public input into the project.

Highway received priority status
The Rogue Valley Area Commission on Transportation (RVACT) designated the US 199 Expressway project a regional priority in 2006, partially due to the increased number of fatal and serious injury crashes along the corridor.

RVACT is an advisory body that considers regional and local transportation issues affecting the state system. RVACT plays a key advisory role in the development of the Statewide Transportation Improvement Program, which schedules funded transportation projects.

The project’s first phase improved safety along more than two miles of the corridor’s west side from Rogue Community College to Midway Avenue, a section of highway notorious for being one Oregon’s most crash-prone sections. The $3.5 million first phase installed medians to channel turning traffic and a raised median to stop a vehicle from crossing into the opposite lanes of travel. The project accommodated u-turns at Hubbard Lane and a wider intersection at Midway Avenue.

Two alternatives surface
A Citizens Advisory Committee (CAC) and Project Development Team (PDT) comprised of representatives, citizens and businesses from Grants Pass and Josephine County developed an alternative design, known as ‘Alternative A’ to present to the public.

Meanwhile, a second group of citizens and businesses pressured city officials to commission another traffic engineer to develop a third alternative. This resulted in the ‘Working

Group’ alternative, which was presented to the project’s CAC and PDT for review and inclusion in the federally-required planning document.

“The ‘Working Group’ alternative didn’t make sense for drivers,” said District Manager Jerry Marmon. “The design forced drivers heading to the coast to start in the right lane and then end up in the far left lane to get to their destination.”

In February 2008, the CAC and PDT selected Alternative A, a design that allowed traffic to move easily through the corridor while accommodating local businesses along the highway and those on a redesigned Redwood Avenue.

Alternative A received some local business support, including the Grants Pass Chamber of Commerce Director Jon Jordan who sat on the project’s development team. However, concerns by several other businesses and locally-elected officials stopped the larger project.

“ODOT will not build a project in a community that does not support the improvements,” said Area Manager Art Anderson, “and that is the case with Grants Pass and Josephine County.”

Phase three shelved
Anderson said the lack of community support was disheartening in light of all the recent state transportation projects in and around Josephine County.

“Over the last few years, ODOT has invested millions into Grants Pass, rebuilding the south Grants Pass exit on Interstate 5, replacing the I-5 bridge over Beacon Drive and adding a passing lane between Hayes Hill and the Applegate River Bridge,” said Anderson. “And that’s in addition to completing the first phase of US 199 Expressway project.”

RVACT met in Grants Pass in March 2011. The Commission voted unanimously to remove the remaining $4.5 million from the final phase of the US 199 Expressway project.

Following the vote, ACT members from Josephine County requested that the funds be reassigned to another project in the county. That request will be debated at the next RVACT meeting scheduled in May.

“I’m disappointed to see this transportation need left unresolved, especially after a thorough public planning process,” Anderson said. “A lot of citizens and business owners volunteered their time to make their community safer. They should be acknowledged for their efforts.” 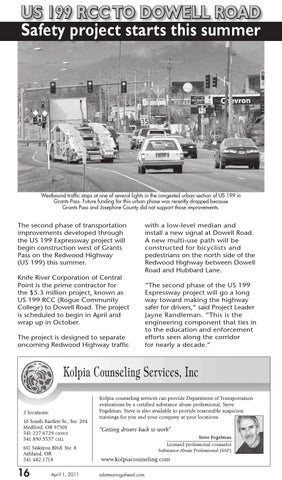