Earlier this spring, prime contractor Concrete Enterprises widened the exit 14 bridge deck and is beginning the necessary concrete pours that will form the surface of the wider structure. This phase follows a winter and spring when the new bridge vertical supports were poured and beams set in place.

According to ODOT Public Service Representative Dennis Steers, much of this work occurred without affecting traffic flow.

“For instance, concrete for the bridge pours was pumped from trucks on the closed southbound lanes of the interstate,” Steers said. “Traffic is flowing about as well as can be expected.

“Keeping southbound I-5 traffic on a median detour helps Concrete Enterprises work in the bridge widening and gives workers a safe refuge off of the Ashland Street overpass.”

Once the exit 14 project is completed, the refurbished bridge will feature two travel lanes, a center turn lane, bicycle lanes and sidewalks. The new design also includes new lighting, traffic signals and a short median on the west side of the interchange.

New bridge open at exit 19
Meanwhile, at the exit 19 bridge replacement project, prime contractor Oregon State Bridge Construction is quickly building the twin to the new bridge that opened last April. Demolition of the old bridge began the same night the new structure opened to traffic. Less than a month later, every vestige of the old bridge is gone. The contractor has drilled and poured the shafts for the twin bridge. The structure’s retaining walls are going up as well.

“The pace of work is not frenzied, but impressive,” said Steers. “Expect to see work in leaps and bounds now that the weather is at its best for construction.”

When complete, the exit 19 bridge will provide two 12-foot travel lanes, a center turn lane, and widened shoulders on a slightly different alignment. The exit 19 bridge design is a simplified version of exit 14.

Art Deco theme
A nine-member Aesthetic Advisory Committee, appointed by the City of Ashland to make design recommendations for the project, recommended an Art Deco theme for the bridges. The new bridges will feature artistic treatments that reflect downtown Ashland’s historic architecture and natural environment.

The group found inspiration in design details from the rooftop of the 1925 Ashland Springs Hotel. Ten-foot tall concrete pylons at the ends of the bridges are topped by pointed chevron designs also found on the hotel’s parapets. The shape also is featured on the supports for the light poles. The pedestrian fencing with a rust-colored powder coating features a central arch design that can be seen on the hotel’s rooftop facade.

Both interchanges will be painted a light tan color to match their natural surroundings and new landscaping will be included.

“When the two projects are finished, the Ashland exits are going to look completely different,” Steers said, “The bicycle and pedestrian improvements should really please everyone.”

The two construction projects are scheduled for completion by mid-2012. 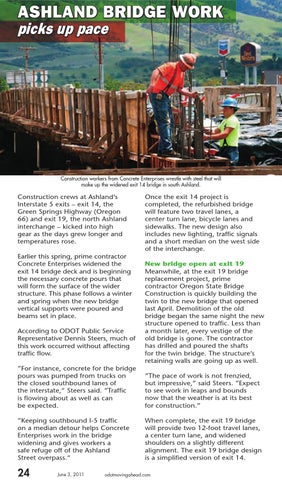