Designers and right of way agents are working toward a construction date of 2014 for the Fern Valley Interchange project in Phoenix. The Interstate 5 Phoenix interchange (exit 24) experiences traffic congestion throughout the day, especially during the morning and afternoon commutes.

Following a busy spring that included approval of the Interchange Area Management Plan by the Phoenix City Council and the Oregon Transportation Commission, right of way agents are acquiring needed properties for the $73 million project.

“We’re coming into the final lap of development for this project,” said ODOT Project Leader Dick Leever. “Not only are we making offers and purchasing property but designer and drafters are working hard to complete final plans.”

Existing and proposed development along the east side of I-5, as well as development growth within the Rogue Valley, are choking the interchange’s capacity and causing safety concerns.

The new interchange will also be constructed using a crossing diamond design that provides a higher capacity while reducing right of way needs. Vehicles crossing the interchange move to the opposite side of the road to either enter I-5 or to cross it, reducing the number of signal cycles for traffic to clear. 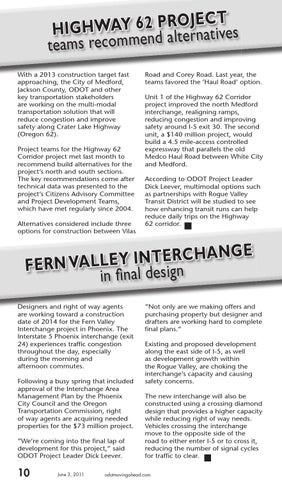