O.K., so you probably don’t think that the package you just dropped off at your favorite freight forwarder plays much of a role in today’s economy. You’re just hoping it arrives in one piece and the recipient is pleased with what’s inside. However, according to the 2010/2011 predictions by Boeing’s World Air Cargo, the forecast for air cargo expansion will be almost 6% annually over the next 20 years. If these predictions prove accurate, traffic in air freight worldwide will triple by 2029. Taking the analogy of a river being fed by creeks, then small streams, and tributaries; you can see how air cargo begins with consumers shipping and receiving goods at small and medium airports, then having those goods transported through hub airports on a global scale.

The 2001 airport Master Plan developed for the Rogue Valley International-Medford Airport, crunched numbers for freight traffic over a decade ago, and these trends have remained on track. As part of the long-range planning strategy, the airport has continued to move towards creating a better infrastructure to accommodate the projected growth.

The ConnectOregon Grant programs initiated under former Governor Kulongoski have been instrumental in continuing freight development at the airport. Initial expansion began with ConnectOregon I funds in the amount of $4.766 million, combined with a 20% match for a total of $5.958 million. The projects, used to enhance multi-modal connectivity, included construction of a small freight storage facility, the completion of a heavy aircraft apron near the northwest area of the terminal, a transit hub, employee parking lots, a connector to Taxiway Alpha, and a small cargo ramp at the south location of the airfield. These projects were completed between 2007 and 2009.

Grant monies received through ConnectOregon II are being invested in three phases. Phases 1 and 2 included the expansion of the south cargo apron, improvements and expansion of the ramp in front of Fed Ex, and the installation of signage and apron lighting. These projects were completed in 2010.

Groundbreaking for Phase 3 of ConnectOregon II is currently underway and will include the construction of two large freight buildings (which can be divided for multiple occupancy), and site improvements including utilities, landscaping and parking. Award amount for ConnectOregon II was $4.760 million combined with a 20% match of $1.190 million, for a total project amount of $5.950 million. Completion date for this final phase is anticipated for the fall of 2011.

In spite of current economic conditions, freight numbers for the Rogue Valley International-Medford Airport were up in 2010 over 2009, by 6.24%. At the end of March numbers were at 9.64% year-to-date. Month-to-month comparisons of March 2010 to 2011 indicated an almost 13% increase. So, the next time you send or receive a package, pat yourself on the back, you’re contributing to a better economic future. 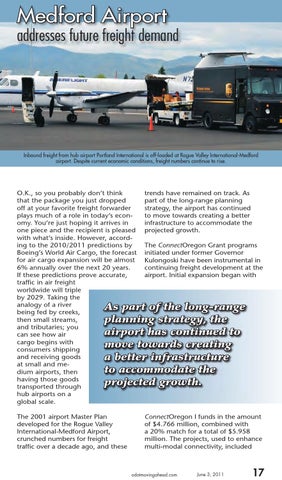