One of the more dangerous intersections in Josephine County is undergoing a widening project to improve sight clearance at the intersection of Oregon 238 (Williams Highway) and Jaynes Drive.

After several months of preparations that included three phases of tree removal, roadwork is set to begin this month.

“This area is a safety priority for our agency,” said ODOT Public Information Officer Gary Leaming.”

According to Leaming, the $1.5 million project widens Oregon 238 to accommodate a center turn lane and allows for a wider shoulder for right-turning movements from the highway to Jaynes Drive. The nearby hill reduces the line of sight for drivers. In addition to tree removal, ODOT combined driveways to make access safer for homeowners near Jaynes Drive.

“This location has a higher than normal crash rate for rural highways of its type,” said Leaming. “The addition of the center turn lane and improved visibility will make the intersection of Williams Highway and Jaynes Drive safer for everyone.”

Drivers can expect lane closures and intermittent delays in the work zone, located about two miles south of the Grants Pass Golf Club. The project is scheduled for completion this summer. 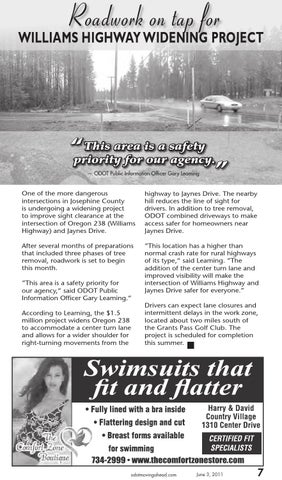