In today’s world, infrastructure is something we all take for granted. Electricity, water, sewer and transportation are just parts of the overall infrastructure system. We depend on that infrastructure to be in place and up to certain standards all the time. What if that infrastructure was less reliable or gone completely? Our lifestyle would be completely different. In order to maintain a vital, healthy economy we must have an adequate infrastructure so those high expectations can be maintained. It should come as no surprise to anyone that there is a cost associated with the construction and maintenance of that effort.

Oregon’s transportation infrastructure is financed by dedicated highway trust funds at the state and federal level. No state income tax dollars are used to build or maintain our streets, roads or highways. You only pay for transportation projects if you use the system. The state collects fees and gas taxes to own and operate a vehicle. Those fees are what make up the revenues to fund the Oregon Department of Transportation budget. The state also receives money from the federal government. It is important to note that the fees collected by ODOT are shared with cities and counties so they can maintain local roads and streets.

As we look to the future of transportation funding we are seeing an uncertain future at best. The primary reason for these reduced revenues is much higher fuel efficiency standards in vehicles traveling on the road. Since 2001, the Oregon Legislature has realized that road funds have been diminishing. The Legislature created the Road User Fee Task Force. This task force recommended a plan to switch from a gas tax-based system to a vehicle miles traveled system. The recommendation was not politically favorable and has not been implemented. In the 2009 legislative session, the gas tax was increased by six cents. This was the first increase in state gas tax funding ODOT received since 1991. While the additional revenue has helped it is not enough to sustain the quality Oregonians expect for their roads and highway systems.

We have been fortunate in Southern Oregon to secure funding the last few years to finish some state highway projects that are critical to moving traffic in a safe and efficient manner in our region. Bringing a project to completion is a long and arduous process. Several projects remain in the pipeline to be finished. Replacement and repair of the two Interstate 5 overpasses in Ashland are nearing completion. Planning for the Highway 62 expressway north of Medford is still in the planning stages. One of the last major I-5 projects in the pipeline is the new Fern Valley interchange in Phoenix.

The responsibility for developing funding lies with Congress and the state legislature. In order to maintain and preserve Oregon’s system of roads and highways in the future, new funding strategies will need to be developed to minimize the decline of the system. Failure to develop those funding strategies will result in deterioration of the system that will be extremely expensive to maintain and could be unsafe to use. In addition to the impact on moving traffic, there will be a huge impact on our local economy as those businesses that contract to do work on those projects will be reduced or eliminated altogether.

About John Watt
John Watt is a native Oregonian, born and raised in Lebanon, Oregon. He relocated to Medford from the Willamette Valley to the Rogue Valley in 1982 with the Fred Meyer organization. In 1990, John was elected to the first of four terms as the State Representative for House District 50.

Appointed Majority Whip in 1993, and serving on a variety of committees including Commerce, Energy and Environment, Information Management, Transportation, and Economic Development and chairing Labor, Rules and Reorganization, Revenue and serving on Ways and Means for four years, John has had a major role in shaping state policy for Oregon. He continues his involvement with state government through the Government Relations Company he and his wife started in 1999.

John has been active in his community serving in many capacities. He has served as a Board Member and Past President of ACCESS, Inc.; as a board member of Dogs for the Deaf, Oregon Community Foundation – Southern Oregon Leadership Council, Bennett Scholarship Fund and the SMART Reading Program as well as through regional organizations such as the Oregon Highway Users Association, the State Road User ’s Fee Task Force, Transportation Advocacy Committee (TRADCO), and as a member of the Medford/Jackson County Chamber Of Commerce.

John is a Paul Harris Fellow and is past president of the Medford/Rogue Rotary Club. With his wife Cathy, he enjoys golfing, reading, and spending time with his three daughters and grandchildren. 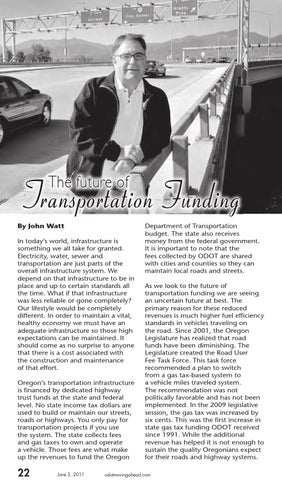