Ashland’s flurry of bridge construction continued this summer with crews busily working on and around Interstate 5 exits 14 and 19. The two projects started in spring 2011 and have a projected completion date of mid-2012.

“The contractor has kept a quick pace and appears to be ahead of schedule,” said ODOT Public Service Representative Dennis Steers. “The project is really taking shape and the public can now see how much of an improvement the new bridge will be when the work is done.”

Meanwhile, prime contractor Concrete Enterprises (of Stayton, Oregon) is making progress at Ashland’s southern interchange (I-5 exit 14). The Greensprings Highway Bridge is being widened from the center out to accommodate higher traffic volumes and improved bicycle and pedestrian safety.

According to Steers, drivers need to be alert and use caution during the next stage of construction as workers and equipment will regularly cross the travel lanes.

“Once the barrier is poured on the south end, the contractor will switch traffic to the outside of the new bridge and focus on the existing roadway in the middle,” said Steers. “Workers will cross a lane of traffic to reach their work.”

Aesthetic design
The new bridges at I-5 exits 14 and 19 will feature artistic treatments that reflect downtown Ashland’s historic architecture and natural environment.

A nine-member Aesthetic Advisory Committee, appointed by the City of Ashland, recommended an Art Deco theme for the bridges.

The group found inspiration in design details from the rooftop of the 1925 Mark Antony Hotel (operating today as the Ashland Springs Hotel). Ten-foot tall concrete pylons at the ends of the bridges are topped by a pointed chevron design also found on the hotel’s parapets. The shape also is featured on the supports for the light poles. The pedestrian fencing with a rust-colored powder coating features a central arch design that can be seen on the hotel’s rooftop facade.

In another nod to downtown Ashland, the light poles on the bridge will provide supports for banners. The light fixtures will be dark-sky compliant to minimize any light pollution at night.

The bridges at exit 14 and exit 19 will be painted a light tan color to match their natural surroundings. New landscaping will be added, too.

Oregon Transportation Investment Act
Funding for both of these projects is provided by the Oregon Transportation Investment Act (OTIA). The agency’s $1.3 billion OTIA III State Bridge Delivery Program is repairing and replacing hundreds of bridges across the state to ensure the unrestricted movement of freight and spur economic growth. Of the 365 bridges in the program, 19 are currently under construction and another 251 have been completed and open to traffic. 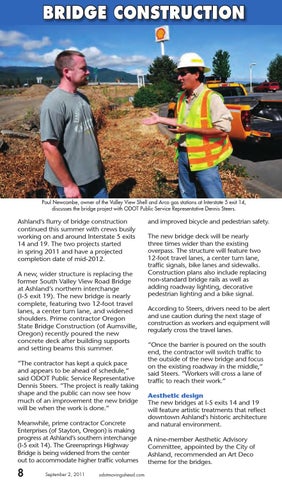